What did Shakespeare look like? From Upstart Crow to statues in bronze 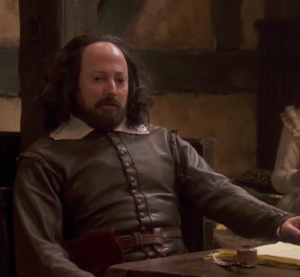 We’re surrounded by images of Shakespeare, yet it’s often said that we don’t really know what he looked like. I’ve been greatly enjoying the TV comedy series Upstart Crow, written by Ben Elton whose brilliant scripts for Blackadder back in the 1980s made it a cult. Elton’s brand of irreverent humour works particularly well in a period setting. Like Shakespeare himself he’s not overly concerned about historical accuracy, but on occasion his Shakespeare, David Mitchell looks uncannily like Shakespeare, or at least how I imagine him.

The series has a terrific cast including comedy stars Harry Enfield as a disreputable John Shakespeare (supposedly the prototype for Falstaff), Liza Tarbuck as Anne his wife and Paula Wilcox as Mary his mother. This is the show’s second series. The first got a bit lost amongst all the 2016 Shakespeare celebrations, but this shows Elton back to the sort of form he showed in the Blackadder days. In this interview he talks about it, a studio sitcom recorded in front of a live audience. “To my mind it’s perfect for Shakespeare. He was the ultimate man of the theatre and used every trick available: “asides”, internal monologues, declamatory rants, costume gags, cross dressing and oafish clowning. I wanted all that theatrical energy for our Shakespeare sitcom.”

Elton makes sure we don’t forget the plays are the important thing, and they supply many of the stories. Each episode references the plot of one of Shakespeare’s plays, so episode 3 shows Will writing a romance set in a foreign location that turns out to be The Two Gentlemen of Verona.  It has also been revealed that we can look forward to a Christmas special featuring Emma Thompson as Queen Elizabeth.

Class is said to be the foundation of every UK sitcom and Elton has adopted this as the key to the stories, even in the title. Upstart Crow was the insulting description penned by writer Robert Greene about Shakespeare the actor when he dared to become an author. In this article Shakespeare’s described as “a classic sitcom figure: an aspiring man whose attempts to make it big are forever thwarted by circumstances beyond his control”. There are still people who think the son of a glove-maker from Stratford-upon-Avon who never went to university can’t have been one of our greatest writers. Mitchell’s Shakespeare is constantly insecure, exasperated by his humble background and unimposing appearance. 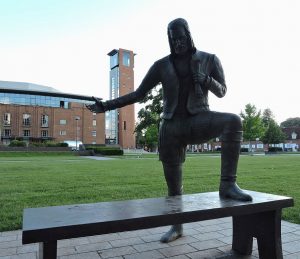 Back in Stratford, or “Stratters” as Shakespeare calls it in Upstart Crow, static images of Shakespeare continue to proliferate: you can already take your pick from rather neglected statue on the Town Hall, the Gower memorial (surely the best), the mosaic above the door of the Old Bank, and the new Lawrence Holofcener statue in the Bancroft Gardens, as well as several in less public outdoor and indoor spaces such as the oldest, the bust in Holy Trinity Church.

The latest controversy relates to a statue gifted to the town by local businessman Tony Bird. The gift was not unwelcome, but where to put it? The original aim was to site it on the traffic island at the top of Bridge Street until it was decided this could be hazardous, then the rather small space opposite the Town Hall (already overlooked by two Shakespeares). In early September 2017 it was announced that that it may be sited in Henley Street, between the Birthplace and the Town’s public library. 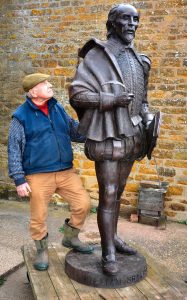 James Butler with his Shakespeare statue

A fine piece of work by the well-known artist James Butler, the 8-foot high statue will also stand on a large plinth, imposing, dignified and rather formal. Recent images of Shakespeare have tended to be friendlier: the Holofcener statue “Young Will” appeared in 2016 to very little fanfare. It’s a statue for the selfie generation, inviting people to interact with him as he stands with one leg on a bench, leaning over, his arm outstretched. I’ve seen people perching on his leg, sitting so his arm goes round them, and whole groups hugging this man of the people.

This summer, too, a portrait of Shakespeare has been put together by passers-by. A 2 metre square portrait in lego was put together outside the RST in a single day on Sunday 27 August by anybody who wanted to join in. Whole families got involved in making up the 1024 square sections that were then slotted into place. The portrait was based on the RSC-owned Flower Portrait, and the lego picture is now on display on one of the upper walkways inside the Royal Shakespeare Theatre. We can all participate in creating a picture of Shakespeare.Whether the portrait is on screen, in bronze or even in little pieces of plastic, these images tell us as much about ourselves as about him. 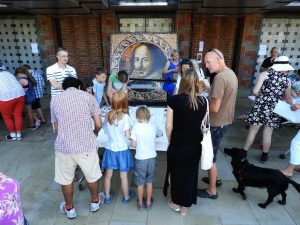 Building the lego portrait of Shakespeare outside the RST 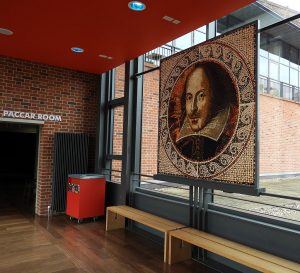 The completed lego portrait inside the RST

2 Responses to What did Shakespeare look like? From Upstart Crow to statues in bronze