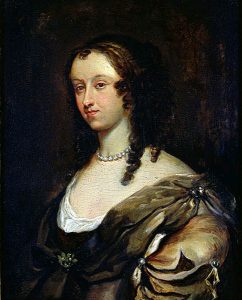 In England, after Shakespeare’s death there followed a period of tremendous change, with the Civil War and execution of the reigning king, Charles 1, followed by the Commonwealth under Cromwell. When the monarchy was restored in 1660 and Charles II made king everything was different again. Charles II, often known as the merry monarch, encouraged the arts and attitudes to women and sex were also transformed.  Nowhere was this seen more than in the theatres, reopened after nearly two decades, where women were for the first time allowed onstage. The presence of actresses on stage, particularly in breeches parts like Shakespeare’s Viola in Twelfth Night, where they showed their ankles and legs, ensured an audience. A career in the theatre might have sometimes been equated with prostitution but it was certainly a step up.

Women were liberated in other ways too. Aphra Behn was the first professional female writer, and born in 1640 she came along at just the right time to make the most of Charles II’s accession. Little is known of her background though her father is thought to have been a barber. She led an exciting life, marrying young  (it isn’t clear whether her husband died or they separated), going abroad as a successful spy, then returning to London where she became a celebrated author. Between 1670 and her death in 1689 at the early age of 49 she wrote around 19 plays, short stories, poems and novels. This genre didn’t really exist before.

Her first play, The Forc’d Marriage, on the subject of unhappy marriage, was a success. Her plays often featured tragic women trapped by their sexual desires and victims of circumstance. Many of these roles were written for Elizabeth Barry, one of the most famous actresses of the time. Today her most often-produced play is The Rover, first put on in 1677, in which Nell Gwynn starred. Her fictional tale Oroonoko which she wrote shortly before she died was an exploration of slavery and race, and as such has become well known.

Behn’s fame resulted in several portraits being painted: one by Peter Lely, court painter to Charles II and his court, a lost painting by John Riley and another by Mary Beale. Mary Beale was another woman who made her way in a man’s profession following the Restoration, being the first female to make her living  as a painter, very much influenced by Peter Lely. Like Behn, her work is now becoming better known, and coincidentally she is one of the subjects of a recent BBC TV documentary Britain’s Lost Masterpieces. This is a clip from the show and here is the link to the whole programme, available to watch again until 10 November 2017.  Peter Lely’s painting of Aphra Behn featured in a 2016 exhibition about Samuel Pepys at the Royal Museums Greenwich. There’s a lot more information here.

On Aphra Behn’s death in 1689 an anonymous poem by “a young lady of quality” was published. An Elegy Upon the Death of Mrs A Behn, the Incomparable Astraea asks:
“Who now of all the inspired Race,
Shall take Orinda’s Place?
Or who the Hero’s Fame shall raise?
Who now shall fill the Vacant Throne?”

With no woman to succeed her,
“Let all our Hopes despair and dye,
Our Sex for ever shall neglected lye;
Aspiring Man has now regain’d the Sway,
To them we’ve lost the Dismal Day…” 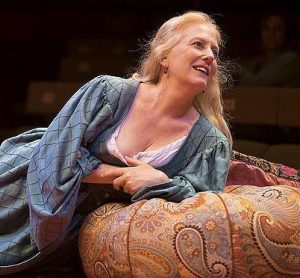 Tod Randolph as Aphra Behn in Or, performed by Shakespeare & Co

As predicted by the writer of the poem, Aphra Behn had no successor, and her work went completely out of fashion.  Her work may still be a rarity on stage but her extraordinary life and achievements are gradually becoming better known. Janet Todd wrote her biography Aphra Behn: Her Secret Life in 1996 and in 2017 has updated and republished it. On 12 October 2017 Behn was the subject of the excellent Radio 4 series In Our Time, in which Todd spoke. An extended version of the programme is available from the BBC, and a bibliography of works about her is also on the site.

Behn has also been the subject of at least three recent plays including Liz Duffy Adams’ 2010 play Or , which has been performed by both Shakespeare & Company in Lennox Massachusetts and the Southwest Shakespeare Company in Arizona. 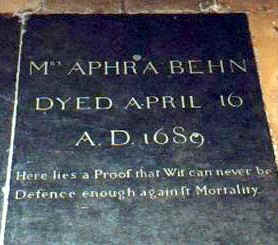 Aphra Behn’s grave, still to be seen in Westminster Abbey, celebrates her wit and the transience of her fame:
Here lies a Proof that Wit can never be
Defence enough against Mortality

The restoration of her reputation began in the early twentieth century when she was championed by Virginia Woolf who wrote in A Room of One’s Own: “All women together ought to let flowers fall upon the tomb of Aphra Behn,… for it was she who earned them the right to speak their minds”.