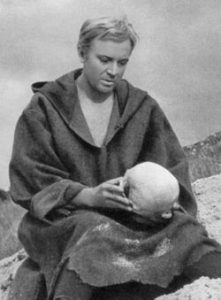 Innokenti Smoktunovsky as Hamlet in the 1964 Russian film

On 25 October 1917 (following the Julian calendar, 7 November on the Gregorian Calendar), the Bolsheviks took over Petrograd. The following day they took the Winter Palace and with it control of Russia. Thus began the Russian Revolution, one of the most influential political events of the twentieth century.

Shakespeare had long been popular in Russia. Even in the 17th century English touring players performed there, and in the eighteenth century adaptations appeared along with a few translations. It was in the nineteenth century though that Shakespeare became really popular when the poet Pushkin began adapting his plays and the first collection of the collected works was published in 1841. Productions,  particularly Hamlet, were staged in Moscow and Petersburg and in the 1850s and 1860s the black actor Ira Aldridge toured with Othello and The Merchant of Venice.

After the 1917 revolution Shakespeare, like all cultural figures, was examined with suspicion. To some in the Soviet Union, Shakespeare’s work was aristocratic and therefore to be condemned, to others he showed a love for ordinary people. As a major world cultural figure Shakespeare was difficult to condemn and eventually his work was officially approved. In Stalinist Russia many writers found it impossible to write for themselves and Boris Pasternak found a way of expressing himself in translating Shakespeare. The Folger Shakespeare Library’s The Collation blog notes: “Unable to publish his own work, Pasternak was able to speak, at least somewhat, through the mouth of a man who had been dead for three hundred years.”

The Folger Shakespeare Library contains some fascinating correspondence from 1942 between the Library’s then Director Joseph Quincy Adams and a group of Russian writers suffering as Pasternak was. They wrote how Shakespeare’s works gave them the strength to carry on: “today the sublime idealism embodied in the works of Shakespeare serves as a living bond for the unity of all progressive mankind in the tremendous battle against the dark forces of violence and falsehood.”

Productions of Shakespeare’s plays, especially Hamlet, came to be enjoyed for their subversive qualities. A BBC article about a production of Hamlet in Lithuania brought to London in 2012 notes “In Soviet-era Lithuania, there were productions of Shakespeare for which people queued through the night for tickets. Shakespeare was culture with official approval, but as one of the few alternatives to tales about earnest Soviet heroes, it was also a way for theatre directors to symbolically address forbidden issues. Going to the theatre had an excitement it perhaps lacks nowadays” 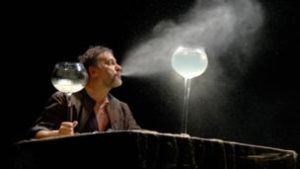 Andrius Mamontovas as Hamlet in the Lithuanian production, 2012

Andrius Mamontovas who played Hamlet said “I miss those secret messages… there were always little secret messages from the artist to the audience. But there’s no need for that now because you can say what you want openly”.

Following the disintegration of the Soviet Union in the early 1990s we have moved into a post-Soviet world. Looking back, Soviet Russia achieved distinction in three Shakespeare films: Othello, directed by Sergei Yutkevich in 1955, Grigori Kosintsev’s Hamlet  in 1964 and his 1971 King Lear. The stunning black and white Hamlet is the best-known, and extremely striking. It uses Pasternak’s translation with a score by Shostakovich, and is based on a 1954 production staged in Leningrad just a year after Stalin’s death. The film is given added edge by the knowledge that the actor playing Hamlet, Innokenti Smoktunovsky, had been sent to the Gulag Archipelago under Stalin.  Kosintsev himself commented that “Hamlet is tormented by what is happening in the prison state around him”, a reference to Hamlet’s line “Denmark’s a prison”.

On a less political level we also remember Prokofiev’s ballet Romeo and Juliet, first staged in 1935-6, appearing in Moscow from 1946, one of the most popular of ballets based on a Shakespeare play.

If you’d like to read more on this subject, this article by Andrew Dickson considers the history of Shakespeare in Russia.