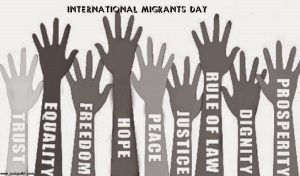 18 December is International Migrants Day, when the courage and contribution of migrants and refugees around the world is especially celebrated.

In the play Sir Thomas More, Shakespeare wrote persuasively about the plight of people fleeing their own countries: he suggests we use our imaginations to put ourselves in their shoes. If you found yourself banished,

whither would you go?
What country, by the nature of your error,
Should give you harbour? go you to France or Flanders,
To any German province, to Spain or Portugal,
Nay, any where that not adheres to England,
Why, you must needs be strangers: would you be pleased
To find a nation of such barbarous temper,
That, breaking out in hideous violence,
Would not afford you an abode on earth.

People from other countries have made huge contributions to life in this country, not least in the arts. One famous migrant whose life has attracted much attention this year is the American black actor Ira Aldridge. He arrived in this country in 1824 and from 1825 was a professional actor, later in his life touring to Europe. At a time when the abolition of slavery was being hotly discussed, Aldridge’s obvious talent helped to promote the argument for abolition. This year a blue plaque has been unveiled in Coventry where in 1828 Aldridge was appointed manager of the theatre, the first black man to hold such a responsible post.

Aldridge toured the provinces relentlessly for a number of years, meaning that he was seen by a huge variety of people around Britain. At the end of his performances he usually came forward to thank his audiences, sometimes making a direct appeal to them to support abolition. Although he performed Othello (the first black actor to do so) and other Shakespeare heroes later in his career, to begin with the parts he played were often what the audience might have expected: in the farce The Padlock he played Mungo, whose comic songs included “Opossum up a Gum Tree”. In Slave! Or, the Revolt of Surinam, he played the Slave of the title. 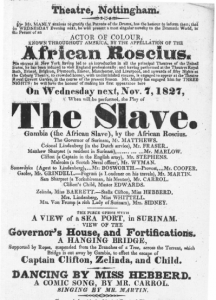 I’ve been enjoying helping the British Library’s In The Spotlight project in which volunteers can help to mark up the Library’s massive collection of theatrical playbills. As I’ve done it, I’ve been keeping my eyes open for Ira Aldridge performing in  regional theatres. In November 1827 he appeared in Nottingham in plays including The Padlock, The Slave, and The Revenge. The playbill describes him as “a most singular novelty, to the Dramatic World, in the person of an ACTOR OF COLOUR, known throughout America by the appellation the African Roscius”.

He was popular in Ireland, performing repeatedly at the Theatre Royal in Dublin. The earliest bills I’ve seen are from December 1831, then again December 1832, and both June and December 1833. Dublin audiences were sophisticated: around the same time the theatre welcomed London’s finest performers such as Mr Macready as Leontes in The Winter’s Tale and Macbeth, and Charles Kean as Richard III and Hamlet.

London critics were often unkind to Aldridge, but audiences admired him. In an article for the BBC History magazine, Tony Howard wrote:

The history of Shakespeare in the theatre is a story of great performers and productions but also a study of audiences. As Aldridge’s life proved, the public could react to the unfamiliar with prejudice and hostility but could also be surprisingly welcoming. When he took on the management of their theatre, Aldridge wrote an open letter to the people of Coventry; when he came to the city, he said, he “might have feared that, unknown and unfriended, he had little claim to public notice — did he not feel that being a foreigner and a stranger are universal passports to British sympathy”.

When he performed in Stratford-upon-Avon in 1851, the playbill noted that he

… wended his way to the shores of Old England, where his talented histrionic exertions have been most warmly and kindly patronized, as a triumphant answer to those advocates of the slave trade, who founded their defences of that nefarious traffic on the inferiority of African intellect and feeling.’

The Shakespeare Birthplace Trust’s Collections blog quotes the playbill in more detail. The SBT has also put up an online exhibition of items from the Collections celebrating Ira Aldridge’s theatrical career, a reminder on International Migrants Day of the positive contribution that migrants make to our world.  As UN Secretary-General Antonio Guterres has said:

“Migration has always been with us. Climate change, demographics, instability, growing inequalities, and aspirations for a better life, as well as unmet needs in labour markets, mean it is here to stay.  The answer is effective international cooperation in managing migration to ensure that its benefits are most widely distributed, and that the human rights of all concerned are properly protected.”