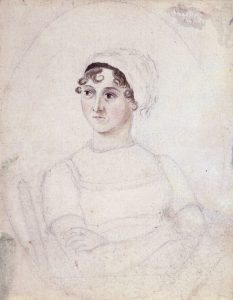 Before 2017 comes to an end, it’s appropriate to mark it as the two-hundredth anniversary of the death of literary giant and Shakespeare-lover Jane Austen. She died, aged only 41, in 1817, in Winchester.

Her admiration of Shakespeare is well-known and during the year the Folger Shakespeare Library has held an exhibition Will & Jane: Shakespeare, Austen, and the Cult of Celebrity to explore the links between them.

Austen is known to have performed in family theatricals as a child, and to have attended performances of Shakespeare in the theatre. It’s obvious from her books that she had also read and absorbed Shakespeare’s plays. In Mansfield Park Shakespeare’s influence is discussed by Henry Crawford and Edmund:

But Shakespeare one gets acquainted with without knowing how. It is part of an English-man’s constitution. His thoughts and beauties are so spread abroad that one touches them every where, one is intimate with him by instinct. – No man of any brain can open at a good part of one of his plays, without falling into the flow of his meaning immediately.”

“No doubt, one is familiar with Shakespeare in a degree.” said Edmund, “from one’s earliest years. His celebrated passages are quoted by everybody, they are in half the books we open and we all talk Shakespeare use his similes and describe with his descriptions . . . . .”

In the same book, Henry Crawford reads aloud from Henry VIII, and before deciding to stage Lovers’ Vows, Hamlet, Macbeth and Othello are all discussed. People have seen echoes of Shakespeare’s All’s Well That Ends Well and King Lear in the actual plot of Mansfield Park. There are lots of references in other books, one of the most irresistible being in Pride and Prejudice where the sometimes spiky interchanges between Elizabeth Bennett and Mr Darcy are likely to have been inspired by Beatrice and Benedick in Much Ado About Nothing.

Though she lived so much more recently, not a lot more is known about Austen’s life than Shakespeare’s. Both writers have become modern day celebrities, with their own lives being creatively examined on film and TV.

The original exhibition at the Folger is now over, but it’s not the end of the story as there’s lots of information on the subject on the Shakespeare & Beyond blog. The main post includes links to others written by the curators, Janine Barchas and Kristina Straub.