January, from a mss at the British Library. http://www.bl.uk/manuscripts/FullDisplay.aspx?ref=Cotton_MS_Tiberius_B_V/1

Although Christmas is well past, it’s been only a week since many people got  back to normal, so attached are the English to festivities at the turn of the year. It’s not a new phenomenon. From Elizabethan times, and probably well before, it was traditional to take a break from unnecessary work just when nature itself seemed to be at rest.

This was particularly marked in the countryside when the first Monday after Epiphany (6 January), was known as Plough Monday. Thomas Tusser, in his Five Hundred Points of Good Husbandry, tells farmers to prepare the ground:
Go breake up land,
get mattock in hand,
Stub roote so tough,
for breaking of plough.

This gorgeous image of a team of oxen drawing a plough is an illustration of January from an Anglo-Saxon calendar held at the British Library. I’m indebted to Eleanor Parker, who tweets as @ClerkofOxford, for this image and for information about Plough Monday. While reading up on Plough Monday and traditions associated with it, I came across references to Distaff Day, also known as St Distaff’s Day and Rock Day. This was 7 January, and was when women began their task of spinning again after the holiday period. Although spinning wheels were in use, spinning by hand using a distaff and spindle remained the most common way of spinning thread, and using a distaff was always a woman’s task.

The return to work seems to have been taken lightly, as on this day it was traditional for men to burn the women’s flax, who retaliated by throwing water over the men. The early 17th-century poet Robert Herrick, whose most famous poem begins “Gather ye rosebuds while ye may”, refers to this in his poem St Distaff’s Day: 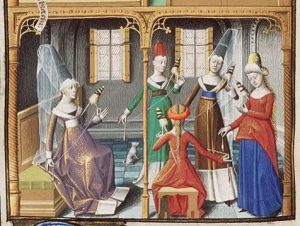 Partly work and partly play
You must on St. Distaffs Day:
From the plough soon free your team;
Then cane home and fother them:
If the maids a-spinning go,
Burn the flax and fire the tow.
Bring in pails of water then,
Let the maids bewash the men.
Give St. Distaff’ all the right:
Then bid Christmas sport good night,
And next morrow every one
To his own vocation.’

There was other jollification too. Thanks again to Eleanor Parker for the link to an early twentieth century book Examples of Printed Folk-lore concerning Lincolnshire, collected by Mrs Gutch and Mabel Peacock. This gives examples of Plough Monday plays which were particularly prevalent in Nottinghamshire, Leicestershire and Rutland. These, described as “the most elaborate of all English seasonal folk-drama”  resemble the much more widespread Mumming Plays, generally including a Fool character, a combat and revival sequence, ballads, dancing and costumes decorated with ribbons.

As well as signalling a return to work, Plough Monday was important symbolically. The Dictionary of English Folklore notes that before the Reformation the celebrations on Plough Monday could be elaborate.  Ploughs were often kept in churches, and they would be blessed and decorated before being taken round the village. Donations were encouraged, to be spent on maintaining “plough lights”, candles kept burning in the church to ensure the continued divine blessing on the plough. These rituals were important in order to ensure the fertility of the soil and the success of the harvest. In a few places it still continues, but then it wasn’t just a bit of fun: in Shakespeare’s lifetime harvests failed and he knew all about the hardships that resulted. In A Midsummer Night’s Dream, poor weather defeats all the efforts of the farmers:

The ox hath therefore stretch’d his yoke in vain,
The ploughman lost his sweat, and the green corn
Hath rotted ere his youth attain’d a beard.

The Christmas period was marked at court too: entertainments of many kinds, including plays, took place until Twelfth Night when order was restored. Shakespeare’s play Twelfth Night celebrates the topsy-turvyness of this time of year, though its plot and characters don’t obviously relate to the date itself. Reading about Distaff Day though, I wondered whether he might not have been thinking about this traditional day when Toby Belch bawdily describes Sir Andrew Aguecheek’s hair: “it hangs like flax on a distaff; and I hope to see a housewife take thee between her legs and spin it off”.