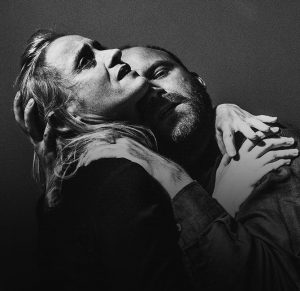 Macbeth is known as Shakespeare’s unluckiest play. For generations it has been referred to by the superstitious as “The Scottish Play” because even speaking its name inside the theatre could bring down disaster. There are many stories of accidents and near-misses, though the violence of this bloody play probably accounts for some.

The most spectacular disaster in the history of the play was the Astor Place riot that took place in New York in 1849. More than 20 people died and well over 100 were injured. The riot was sparked by two rival productions of the play starring William Macready, the greatest British actor of the day, and  Edwin Forrest, the first internationally successful home-grown American actor. Upper class Anglophiles supported Macready while working-class Americans and Irish immigrants favoured Forrest, the rivalry being fuelled by the press. The play itself was not the cause of the disruption, but the riots added to the play’s unfortunate reputation. 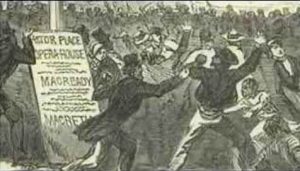 Macbeth is also one of Shakespeare’s most popular plays, and this year, 2018 is already being called The Year of Macbeth, with no fewer than seven versions to be seen on the stage and on screen, varying in scale from a two-hander to a full opera.  Here’s a run-down.

The Out of Chaos company is already on tour with their two-man production of the play. They are visiting regional theatres until March.

The Tobacco Factory in Bristol’s production starts on 22 February: “Macbeth speaks to a world we find ourselves living in now; a world in which politicians lie to our faces but no one can plaster over the truth that the planet is threatening to turn on us.” The Macbeths will be played by Jonathan McGuinness and Katy Stephens.

Public booking has just opened for the National Theatre’s production officially opening on 6 March with a live screening in May. The cast will be led by Anne-Marie Duff and Rory Kinnear, directed by Rufus Norris in “Shakespeare’s most intense and terrifying tragedy”. The play “explores the all-consuming effect of power as the Macbeths desperately attempt to cling on to it. Ambitious and ruthless, the couple set about murdering just about everyone in their vicinity in order to take the throne. Once power is attained, they find that it is difficult to hold on to. Macbeth becomes ever more tyrannical, his wife descends into a madness and as their unwavering want for glory grows, a bloody Civil War erupts, costing them a whole lot more than their sanity.”

A new film version of Macbeth is to be released to cinemas across the UK on March 13. The film, by Kit Monkman, is described by Joe Evea from the distributor Cinevent:

“The film represents an entirely new perspective on Shakespeare’s work. Filmed using the latest digital technology, the production offers a challenging and thought provoking vision that will please purists and offer an accessible, immersive experience for a new generation of fans. Filmed specifically for a cinema audience, the innovative use of green screen technology provides a compelling juxtaposition between “real” and “digital” worlds”

And from the website: “The film magnifies the raw, dark, imaginative power of the text with an extraordinary, dynamic modern aesthetic… It is a feast not just for the eye, but also for the audience’s imaginations.”

Also on 13 March, with a live screening on 11 April is the Royal Shakespeare Company’s new version of the play directed by Polly Findlay: “Our contemporary production of Shakespeare’s darkest psychological thriller marks both Christopher Eccleston’s RSC debut and the return of Niamh Cusack to the company.” It will run from 13 March to 18 September. 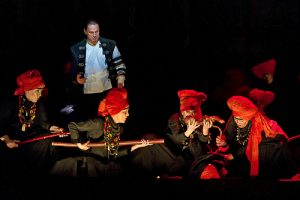 The Royal Opera House is also reviving Phyllida Lloyd’s production of Verdi’s magnificent operatic version of the play. It will run from 25 March to 10 April and there is to be a live showing in cinemas of the production on 4 April. Here’s some background from the ROH’s website:

“Verdi’s life-long love affair with Shakespeare’s works began with Macbeth…  Every bar of [the] score… bristles with demonic energy.”

Phyllida Lloyd’s 2002 production… is richly hued, shot through with black, red and gold. The witches – imagined by designer Anthony Ward as strange, scarlet-turbaned creatures – are ever-present agents of fate. Lloyd depicts the Macbeths’ childlessness as the dark sadness lurking behind their terrible deeds.”

At the Old Rep Theatre in Birmingham another production is being staged from 10-14 April by the National Production Company. Venues are still being added so it may be worth checking their website.

Here’s a summary of the important dates if you want to catch any of the Macbeths on offer.

January-March Out of Chaos company on tour

10 May National Theatre live in cinemas