Angles on Shakespeare in Stratford 2018 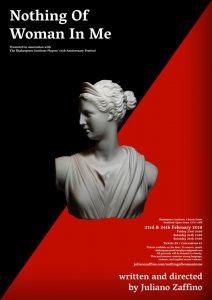 Nothing of Woman in Me poster

The first, and coming up imminently, is the first part of the Shakespeare Institute Players’ 65th Anniverary Festival, Nothing Of Woman In Me, a series of four monologues for Shakespeare’s voiceless women.

A traumatised Lavinia seeks redress from those who have wronged her. Jessica ponders the absurdity of her life, passed from one man to another, while Lady Macbeth wars with her fractured psyche for dominance in a world that is leaving her behind. At last Hermione, stiff and tired from centuries as a submissive statue, looks to the unknown for salvation.

It’s been written and directed by Juliano Zaffino, and will receive three performances at the Shakespeare Institute. Tickets can be booked in advance by email:

All proceeds will be donated amongst four charities supporting women’s causes: Women’s Aid, Girls Not Brides, The Malala Fund, and Lupus UK.

The title of Zaffino’s piece comes from the death scene of that very much not silent woman, Cleopatra. Welcoming the arrival of the asp that is to release her from life she invokes the influence of the moon, whose inconstancy and monthly cycles are often associated with women.
What poor an instrument
May do a noble deed! he brings me liberty.
My resolution’s placed, and I have nothing
Of woman in me: now from head to foot
I am marble-constant; now the fleeting moon
No planet is of mine.

Then in early March, Edward’s Boys are off again with performances of John Lyly’s The Woman in the Moon. Lyly’s plays were part of the cultural scene that Shakespeare must have encountered and been influenced by when he began his theatrical career. Written in 1590, it’s an allegorical play that speaks to our modern preoccupations with the environment and feminism. Here’s a summary of the plot: 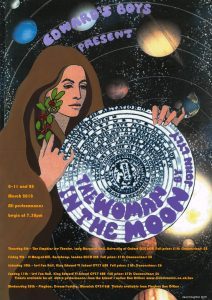 The Woman in the Moon poster

Nature, the pre-eminent deity, is female and she has created the universe and all things living. Four young shepherds, residents of Utopia, complain that they have no female companion, so Nature agrees to create the perfect female figure, Pandora.  The envious gods, represented by the seven planets, decide to take revenge upon Pandora according to their dominant features: Saturn (melancholy); Jupiter (pride); Mars (aggression); Sol (poetry and healing); Venus (sexuality); Mercury (deceit); Luna (changeability).

In each subsequent scene, we see the four shepherds suffer under Pandora’s various moods, as she is influenced by one planet after another.  John Lyly’s The Woman in the Moon is Lyly’s only play written in blank verse. It is a strange, unearthly, esoteric mixture of genres and tones. Furthermore, it is a quite extraordinary investigation of female subjectivity.

Edward’s Boys are collaborating with the ongoing academic Before Shakespeare project with this production, and the director, Perry Mills, has written a post about the play here. He’s set the play in the 1967 “Summer of Love” and the music, always a high point of Edward’s Boys productions, should be excellent. Performances will take place in a variety of venues during March, including King Edward’s School in Stratford-upon-Avon on 10 and 11 March.

On 9 March the Shakespeare Institute are holding a one-day symposium Applying Shakespeare. Under this broad title, there will be an exploration of a range of performance forms, often in non-theatrical spaces and with an agenda of personal or social change. There will be papers considering the use of Shakespeare in relation to disability, mental health, performance in custodial settings, and social inclusion. One presentation that sounds particularly interesting is to be by Matthew Hahn who will look at the issue of Ethical Leadership through his play The Robben Island Shakespeare, on the famous copy of the plays that circulated among inmates, including Nelson Mandela, in the infamous South African prison. It should be a really fascinating day looking at Shakespeare from a number of unusual angles.