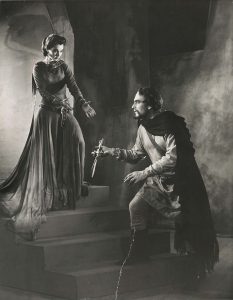 In 1955, sixty-three years ago, Stratford-upon-Avon experienced its most glamorous season of Shakespeare. Laurence Olivier and his wife Vivien Leigh, the golden couple of stage and screen, performed in three plays at the Shakespeare Memorial Theatre: Twelfth Night (Malvolio and Viola), Macbeth (Macbeth and Lady Macbeth) and Titus Andronicus (Titus and Lavinia). 500,000 applications were received for the 80,000 tickets available for the whole season before the box office had even opened. Audiences were thrilled, but behind the scenes, the couple’s troubled marriage was finally breaking down.

One of the major factors was the long-standing mental illness that had afflicted Vivien Leigh for well over ten years, perhaps much longer. She suffered from what is now known as bipolar disorder, then little understood. The only treatment for her dreadful attacks was electroconvulsive therapy, which Leigh endured several times with little success.

She was a fine actor winning Academy Awards for playing Scarlett O’Hara in Gone With the Wind and Blanche in A Streetcar Named Desire, the second of these while already ill. But Leigh longed to be recognised as a classical actor in her own right even though she knew she could never compete with her husband, the most brilliant actor of the day. The couple had acted together before but the season at Stratford was particularly risky. The schedule was long and gruelling, and she would be compared directly with Olivier.

Why on earth did she do it? It’s hard to imagine now that the professionals who had treated her were not able to dissuade her, but symptoms of bipolar disorder include increased energy, an unrealistic belief in one’s abilities and denial that anything is wrong.

The season would have been difficult for anyone. It started with the gentle comedy Twelfth Night though there were arguments between the play’s director, John Gielgud, and Olivier. The reviews were not particularly favourable and paid more attention to Olivier than Leigh. Then came Macbeth. This was the most widely-anticipated play, the chance to see a charismatic married couple playing Shakespeare’s tragic Macbeths. Anthony Quayle, the Director of the Stratford Festival, found Leigh “was feeding her own mania into the tragedy…. She was mesmerizing”. But Kenneth Tynan’s review was deliberately cruel towards her. While “Sir Laurence shook hands with greatness… Vivien Leigh’s Lady Macbeth is more niminy-piminy than thundery-blundery, more viper than anaconda, but still quite competent in its small way”. According to Alexander Walker’s book Vivien, Tynan later admitted “In retrospect, the combination of Olivier and Vivien, with its emphasis on the way Macbeth is held in sexual thrall by his lady and so will do anything to please her, made more sense of the play than any other reading he had seen”. (p221)

Playing Lady Macbeth’s descent into madness must have been traumatic for Vivien. And Olivier had to play the scene with the doctor in which Shakespeare shows a real understanding of mental illness:

Canst thou not minister to a mind diseased,
Pluck from the memory a rooted sorrow,
Raze out the written troubles of the brain
And with some sweet oblivious antidote
Cleanse the stuffed bosom of that perilous stuff
Which weighs upon the heart?

To his credit, Olivier had spent many years struggling with Leigh’s bouts of illness: “At these moments, Vivien turned into a stranger, whom he was seemingly incapable of helping”. 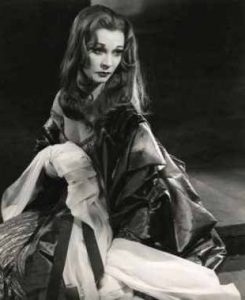 One section of Anthony Holden’s book Olivier makes particularly hard reading. Actor and writer Noel Coward had been a close friend for many years, but in his opinion Olivier had “hideously spoiled” Leigh and “the seat of all this misery is our old friend, feminine ego”. His verdict was “If Larry had turned sharply on Vivien years ago and given her a good clip in the chops, he would have been spared a mint of trouble”. As Holden notes, “This intemperate verdict chillingly reveals how little Vivien’s mental illness was understood at the time, even by the most sympathetic of friends and sophisticated of society”. (p299-300)

The final straw in 1955 was Titus Andronicus, Shakespeare’s bloodiest play. Leigh was to play Lavinia, raped, mutilated and finally killed by her own father. “Vivien had…scarlet ribbons fluttering from her lips imaginatively suggesting the terrible butchery involved. Yet under Peter Brook’s direction, she mimed her distress most movingly and, advancing on Olivier…with her amputated arm stumps… she resembled a maimed and mute Cordelia.” (Walker, p 222)

By the end of the season Leigh was seriously ill. Typically, she blamed herself for her lukewarm reviews, saying she should have taken more risks with the roles. It would be some years later, after an international tour of Titus Andronicus in 1957, that they admitted their marriage was over. Vivien Leigh continued to act successfully for the next few years. It’s a pity that her strength of character, determination and talent are so little remembered amongst the more sensational aspects of her life. Her personal archive, including letters, photographs and diaries, is now publicly available at the Victoria and Albert Museum so her voice may be better heard. There’s a post here that includes a link to the catalogue. She died in 1967 aged only 53.

It’s hard to imagine now that even relatively recently so little medical help or understanding was available to one so famous. Mental illness in general, and bipolar disorder in particular, now carries much less stigma and public figures are able to admit they are sufferers. There is though still much to do and 30 March is now designated World Bipolar Day with the aim of raising awareness of bipolar disorders and improving sensitivity towards the illness.

One Response to Remembering Vivien Leigh on World Bipolar Day