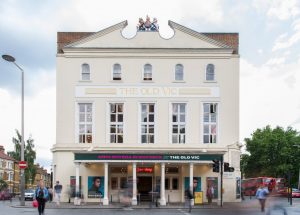 11 May 2018 is the 200th anniversary of the opening of one of the most important theatres in the UK, known as the Old Vic. It was originally named the Royal Coburg Theatre, after Prince Leopold of Saxe-Coburg and his wife Princess Charlotte of Wales, who laid the foundation stone.

Situated on the then-unfashionable south side of the Thames, the theatre was always an alternative to the famous London theatres Drury Lane and Covent Garden. Its broad audience was attracted by a repertoire of  mostly melodrama and pantomime. The theatre’s connection with Shakespeare, though, goes back to these early days. In 1831 the great, if unconventional actor Edmund Kean performed Richard III, Othello, Macbeth and King Lear there. Kean had performed on tour all round the UK, but he lost patience with the theatre’s audience, proclaiming:  ‘In my life I have never acted to such a set of ignorant, unmitigated brutes as I have before me’. 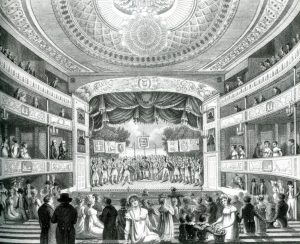 The interior of the Royal Coburg Theatre

Shortly afterwards the theatre was renamed the Royal Victoria after the then Princess, later Queen Victoria. It remained though a theatre for the common people, and after attempts to turn it into a music hall , in 1880 social reformer Emma Cons made the Old Vic respectable by renaming it the Royal Victoria Hall and Coffee Tavern, a ‘cheap and decent place of amusement on strict temperance lines’. The word theatre, with its disreputable associations, was dropped though plays were occasionally performed.

In 1898 Emma Cons appointed her young niece Lilian Baylis to run the building and on the death of her aunt Baylis acquired a theatrical licence. While Emma Cons had thought most theatre was incompatible with temperance, Lilian Baylis embraced Shakespeare’s plays as being instructive and a good influence on the behaviour of audiences. The Old Vic Shakespeare Company was formed under director Ben Greet, and their first big project was to perform all the plays in Shakespeare’s First Folio over 7 years. This had never been done before and it resulted in the Old Vic becoming the London home of Shakespeare’s plays. The theatre created its own stars, particularly Edith Evans, Sybil Thorndike, Laurence Olivier, Ralph Richardson, Michael Redgrave and the young John Gielgud who went on to lead the Company. 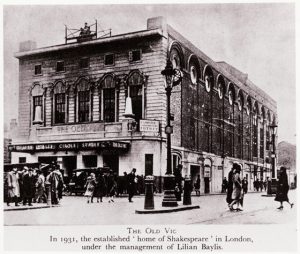 Lilian Baylis died in 1937 during rehearsals of Laurence Olivier’s Macbeth. Two years later the second world war broke out and in 1940 the theatre was damaged by bombing. Undaunted, the Company went on tour until 1944 when it was felt that it should establish itself in London again at the New Theatre. It was not until 1950 that the Old Vic reopened with a production of Twelfth Night and from 1953 to 1958 director Michael Benthall oversaw another complete cycle of Shakespeare’s plays beginning with Richard Burton playing the title role in Hamlet. Rising star Burton had turned down a Hollywood film contract in favour of performing at the Old Vic. Later in the cycle a very young Judi Dench made her Shakespearean debut. The connection between Shakespeare and the Old Vic was once again established, particularly for young audiences, creating in many of them an enthusiasm for Shakespeare that lasted a lifetime.

In 1946 as the country came out of war the Joint Council of The Old Vic and National Theatre was established, reviving the idea of a National Theatre. When Laurence Olivier was appointed the National Theatre’s first director in 1962 the Old Vic became its temporary home until the South Bank theatre was completed. During this decade or so young actors like Albert Finney, Maggie Smith and Peter O’Toole built up their reputations.

The Old Vic’s fortunes have been more mixed since then but there have always been  Shakespeare productions: in the late 1970s Derek Jacobi performed his Hamlet there with the Prospect Theatre Company. On the Wikipedia page about the theatre you will find on the right hand side a link to a podcast of Jacobi talking about the theatre. In 2000 the Old Vic Theatre Trust was formed and since then there has been much exceptional Shakespeare work including Kevin Spacey’s Richard III, Simon Russell Beale in The Winter’s Tale, Imogen Stubbs and Ben Whishaw in Hamlet and Glenda Jackson as King Lear. The theatre retains its royal connections and focus on young people, in 2017 Prince Charles becoming a patron and creating a partnership with the Prince’s Trust. 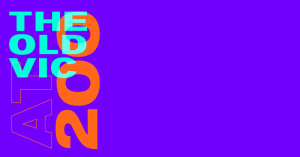 There’ll be no Shakespeare in the birthday season, but current Artistic Director Matthew Warchus says “To honour The Old Vic’s 200th birthday we are celebrating it partly as a treasured historic icon but mostly as an adventurous, youthful, hub of creativity with a vibrant future ahead of it… The Old Vic will… continue to mix pertinent revivals and refreshed classics…, but for this birthday year we are allowing ourselves to focus on new work.

Over the weekend events will include, at noon on Saturday, a procession complete with marching band from the National Theatre to the Old Vic, which will include some Shakespeare as an acknowledgement of the part he has played in the history of this great theatre.