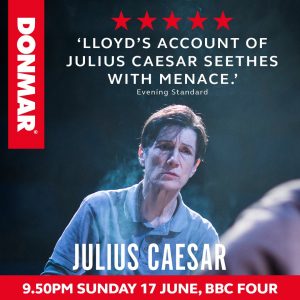 I’ve written a number of blog posts, over several years, about Phyllida Lloyd’s all-female Shakespeare trilogy that began at the Donmar Warehouse theatre in London. One’s here, and here’s another. It wasn’t an obvious trilogy, starting with Julius Caesar, then Henry IV, and finally in 2016, The Tempest.

Now the whole trilogy is being made available on iPlayer, and is being given a great start with the screening on BBC 4 of Julius Caesar. After 17 June 2018 all three will be available for six months as part of the BBC’s Hear Her season, a great opportunity to see these extraordinary productions. Here’s a quote from the webpage:

Described by Susannah Clapp (Observer) ‘As one of the most important theatrical events of the past 20 years’, the Donmar Shakespeare Trilogy began in 2012 with an all-female production of Julius Caesar led by Dame Harriet Walter. Set in a women’s prison, the production asked the question, “Who owns Shakespeare?” Two further productions followed: Henry IV in 2014 and The Tempest in 2016, all featuring a diverse company of women. The Trilogy enthralled audiences in London and New York and was shared with women and girls in prisons and schools across the UK. The film versions were shot live in a specially built temporary theatre in King’s Cross in 2016, and now offer screen audiences a unique access to these ground-breaking productions.

Lots more information is available, for instance here is a discussion by Jackie Clune and Phyllida Lloyd about how the company explored gender in the rehearsal room.

And there are a lot of related links here.

It’s great to have a really long time to take it all in. The productions are challenging, not at all glamorous or decorative, but worth the effort. I’d go so far as to say they could change the way you think about Shakespeare.