Shakespeare and the People’s Vote 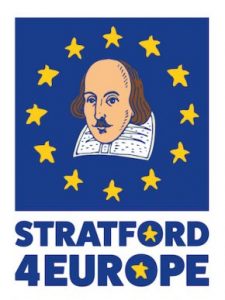 While the Stratford4Europe group were waiting for the coach back from the People’s Vote March on 23 June 2018, somebody asked “Which way would Shakespeare have voted in the Referendum?” One of the party checked Google and pronounced that most sites said he would have voted Leave. This casual approach has damaged the whole debate, so here are a few thoughts about why the group is right to use Shakespeare’s head on their logo!

Looking at some of the sites, they predictably quote speeches like “This England” from Richard II where the island is described as having a defensive moat to repel invaders. In it, John of Gaunt lists the virtues of the country. But the point of the speech is to criticise the King and his hangers-on who are bringing the country down, not foreign powers.

In fact, in most of the history plays, the troublemakers are British. Seeing a difficult time ahead, the newly-crowned Henry V is recommended to “busy giddy minds with foreign wars”. This is a distraction technique: blaming foreigners for our problems has always been  easier than trying to actually solve them.

But looking at individual speeches for support is a pretty superficial way of thinking about the question. Shakespeare nearly always puts both sides of every argument. Speeches that directly contradict each other can be found within the same scene, like the Forum Scene in Julius Caesar. Shakespeare’s not writing a lecture, he’s writing a drama, at the heart of which are arguments, disagreement and conflict. It’s the reason why he portrays so few happy marriages.

So how might we get closer to deciding what Shakespeare’s own views were? Rather than looking at individual speeches, it might be better to look at the subjects Shakespeare chose to dramatize, and how he handles them. Many of the history plays are about the civil wars that according to the Tudor version of history stopped with the death of Richard III. That play ends with the observation that “England hath long been mad, and scarred herself”, and a promise that this will change. We have seen riots, petty crime, and most disturbingly fathers and sons fighting each other. This comes to a head in Henry VI part 3 where in a bloody battle Shakespeare brings onstage a son who has killed his father, and a father who has killed his son. In this moment Shakespeare brings the appalling cost of civil war directly before us.

This came to my mind when, after Saturday’s march, two women asked if they could photograph my friend’s banner. The younger one told us that her partner of 10 years was German, that they had met on the European Erasmus program, but they now worry about the future. Her mother is European, her father English. Since the vote, she never speaks to her father or his family who voted Leave. The older woman, her mother, has lived here for decades but immediately after the vote people began to ask when she was going home. The conversations were polite, she said, but no less upsetting because of that.

Shakespeare might have felt himself to be British, but this never meant being isolated. As a growing trading nation ties with neighbours had to be maintained, especially through marriages. When the English win at Agincourt and Henry V has all the bargaining chips, his “capital demand” is marriage with the French princess. Both sides want peace and the prosperity it can bring.  The Duke of Burgundy describes the effect of war on the people: 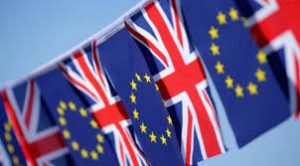 Our selves and children
Have lost, or do not learn for want of time,
The sciences that should become our country,
But grow like savages, as soldiers will
That nothing do but meditate on blood.

It’s in Cymbeline that Shakespeare makes most clear that being friends with your neighbours is more important than winning. The play is set in the Roman period, and when Britain refuses to pay the tribute (taxes) demanded by Rome, war is declared and a Roman army invades. The plucky British army wins the battle. But then, the King does the most surprising thing. He decides, after all, “to pay our wonted tribute”. All is peace (a word repeated three times in the last eight lines of the play), with Roman and British flags waving “friendly together”. It’s much better to be friends even though you may not always agree.

Over and over again, it’s division that’s the real enemy. Romeo and Juliet doesn’t end with the tragic deaths of the young lovers, but with the reconciliation of Capulet and Montague whose mutual hatred created the circumstances in which it happens. “All are punished”, says the Prince, including himself who turned a blind eye to the conflict.

King Lear sets out to avoid conflict by splitting his kingdom between his daughters “that future strife/May be prevented now”. Instead the division of the kingdom leads to civil war, the deaths of Lear and all his daughters, and a future full of uncertainty.

All plays usually end with some sort of resolution, but for Shakespeare the moral is surely that we’re stronger together. Nothing is more damaging than division, especially from those closest to you. 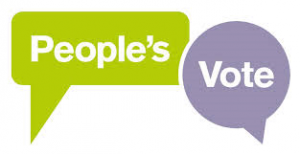 And now, a request. The point of the march on Saturday 23 June 2018 was to demand a People’s Vote on the final deal with Europe. When we see what we’re being offered, we should be allowed to choose if we want it. To achieve this, they need lots of signatures, so if you want to support it, follow this link.