Cicely Berry, Head of Voice for the RSC 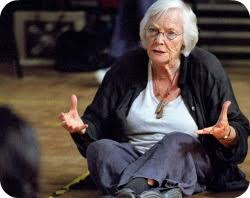 Cicely Berry’s name rarely appeared on any of the publicity for the RSC theatre productions in which she’d been involved, normally being tucked away towards the bottom of the cast list as Head of Voice. Unlike the contributions of designers and composers you couldn’t see or exactly hear her work, and at the end of the play there was certainly nothing left behind. Universally known as Cis, over nearly six decades she was regarded with admiration bordering on reverence by actors at the Royal Shakespeare Company, and her death on 15 October 2018, at the age of 92, is being marked with an outpouring of respect and affection.

Physically tiny, she was an unlikely-looking revolutionary but her influence was immense. At the beginning of her career speaking was all about elocution, and there was a strong link between the speaking of Shakespeare’s words and singing, seen most strongly in John Gielgud’s much-admired technique. For many years from 1936 the theatre in Stratford employed Denne Gilkes, a distinguished performer and teacher of music to teach both voice production and singing. Denne too was something of a legend, working with actors including Ian Richardson, Diana Rigg and Paul Scofield.

In the sixties, though, everything was changing. Cis Berry’s approach must have come as a shock to those who were trained more traditionally. She championed the idea that there wasn’t a right way or a wrong way of speaking, but that each actor could find his or her own voice. The public sessions I attended gave a flavour of how she worked with actors, making us all run across the room, walking in different directions, always doing something physical and freeing the words from preconceived ideas about making a beautiful sound or wringing the meaning out of each syllable.

Generations of Voice Directors have taken on Cis’s ideas, and she wrote down and published them in a series of books including Voice and the Actor, The Actor and the Text, and Your Voice and How to Use It. There is even a series of DVDs now available under the title The Working Shakespeare Library.

The Royal Shakespeare Company’s Artistic Director Gregory Doran has written a piece about her that appears on the RSC’s website here, and just a couple of years ago the Independent published an interview with her that captures her character, ideas and spirit.

This entry was posted in Uncategorized. Bookmark the permalink.

One Response to Cicely Berry, Head of Voice for the RSC