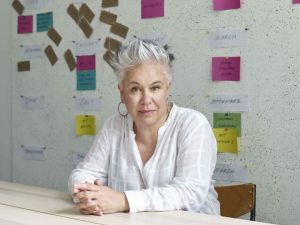 This week’s meeting of the Stratford-upon-Avon Shakespeare Club promises to be quite a departure from the Club’s usual lectures because the speaker, Emma Rice, this year’s President, has gone on record as saying that she doesn’t really understand a good deal of what Shakespeare wrote. Her talk will be entitled “The Trouble with Shakespeare”.

Her only previous Shakespeare work in Stratford-upon-Avon was Cymbeline at the Swan Theatre in 2006 as part of the RSC’s Complete Works Festival. Rice directed her own “freely adapted” version which was notable for containing very few of Shakespeare’s own words. I didn’t enjoy it though I thought it was a genuinely imaginative effort to explore the strange fairy-tale quality of the play, and didn’t warrant Michael Billington’s verdict of being “coarsely reductive”.

Rice built her reputation with Cornwall’s Kneehigh company before being appointed to lead Shakespeare’s Globe Theatre. At the time the Daily Telegraph described her as “not so much a breath of fresh air on the London theatre scene as a one-woman tornado.” Her plans for the Globe included swapping the genders of Shakespeare characters, welcoming noisy members of the audiences and promised to “chop out bits of Elizabethan language which don’t make sense to modern audiences”.

It wasn’t long before her approach was challenged by the Globe’s board, though her first productions were popular and her best work described by the Observer’s Susannah Clapp as “exuberant, rambunctious, joyful”. “I don’t know who the Globe thought they were appointing” she continued. But following a disagreement with the board, Rice resigned.

Rather than allowing the unhappiness at Shakespeare’s Globe to deflate her, Rice has moved on. In June 2017, while still nominally running the Globe, her next project was announced. She has founded a new company based in Bristol, Wise Children, that will produce ensemble work to tour nationally and internationally. Its first production also called Wise Children is now onstage. An article in Inews noted that the play “Stuffed with twins, disputed parentage, near-incestuous romances, lost relatives and big reveals, …is gloriously, irreverently Shakespearean.

Like other members of the Shakespeare Club I’m looking forward to hearing Emma Rice’s unorthodox opinions of our favourite dramatist. I hope she will be challenging, frank and refreshing. But will we all need the smelling salts?