The first of May seems to have been one of Shakespeare’s favourite days. In Much Ado About Nothing Beatrice is compared with her cousin Hero : she “exceeds her as much in beauty as the first of May doth the last of December”.  We can see what he meant: flowers are beginning to bloom, the weather is getting warm, grass is growing, trees are coming into leaf and seedlings are coming through. Summer is properly on its way.

For the same reason, 29 April to 5 May 2019 is National Gardening Week. This annual festival celebrates all aspects of gardening and this year its theme is Edible Britain. Plants grown for food are rarely as beautiful as the flowers, and with vegetables and fruit available in supermarkets all year round, many gardeners no longer grow their own. But as we become more aware of the importance of sourcing our own food locally, interest in planting food crops has been growing. There’s also a growing awareness that gardening is good for our physical and mental health. 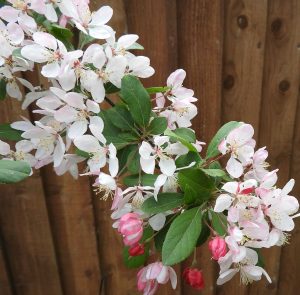 Shakespeare’s interest is well documented. He mentions plants and flowers in many of his plays from Ophelia’s list of herbs in Hamlet to Perdita’s flowers in The Winter’s Tale. But we can tell that Shakespeare was also interested in the act of gardening itself. Hamlet talks about an “unweeded garden that grows to seed”, in Richard II the gardeners train the growing branches of the “dangling apricocks”, and in Henry VI part 2 the Earl of Suffolk displays a knowledge of apple grafting, when  “noble stock/Was graft with crab-tree slip”. These gardening techniques are all used as metaphors, but there’s a bit of a threat in Richard III’s call for strawberries from the Bishop of Ely’s garden. The humblest of vegetables also get mentioned. The “rude mechanicals” in A Midsummer Night’s Dream are, not surprisingly, banned from eating smelly onions and garlic before their appearance at court, but Shakespeare refers to the same plants at the emotional climax of All’s Well That Ends Well. As the impossible happens when a pregnant Helena appears before her husband, Lafeu,speaks for all of us when he says “Mine eyes smell onions; I shall weep anon”.

Shakespeare didn’t think there was anything odd about mentioning these very ordinary plants and how to grow them, but Shakespeare gardens around the world have traditionally concentrated on ornamental varieties.  This article from Vogue includes quotations from Jennifer Williams, who cares for a Shakespeare Garden at Brooklyn Botanic Garden. “What surprises visitors…is that the Englishman mentioned vegetables and herbs, and that there are so many plants that are now considered roadside weeds”.

The Shakespeare Birthplace Trust’s gardens in the Stratford-upon-Avon area, by contrast, include vegetable plots and herb gardens as well as plants grown for their beauty. At Mary Arden’s Farm in Wilmcote vegetables are grown, harvested and cooked as they would have been in Shakespeare’s time. I recently found a short video posted on Twitter to coincide with National Gardening Week that points out that foraging for herbs and wild flowers was also important as these plants supplemented the diet in springtime. Summer may be on its way, but the abundance of the harvest is still several months distant. At this time of year plants like turnips and apples, that had been in store during the winter, and leeks that were still in the ground, were all valuable. 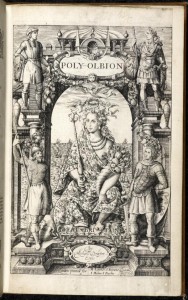 The title page of Poly-Olbion

One of Shakespeare’s contemporaries, Michael Drayton, wrote an extraordinary account of Britain, entitled Poly-Olbion, which he published in 1612. In its 15000 verse lines it catalogues the humble vegetables that were grown here in Shakespeare’s lifetime. Some now have different names, and some have dropped out of favour, but many are still grown in British gardens:

The Cole-wort, Cauliflower, and Cabbage, in their season,
The Rouncefall, great beans, and early ripening peason:
The Onion, Scallion, Leek, which housewives highly rate;
Their kinsmen Garlic then, the poor man’s Mithridate;
The savoury Parsnip next, and Carrot pleasing food;
The Skirret (which some way) in sallats stirs the blood;
The Turnip, tasting well to clowns in winter weather.
Thus in our verse we pott, roots, herbs, and fruits together.
The great moist Pumpkin (pumpion) then that on the ground doth lie,
A purer of his kind, the sweet Muskmullion by;
Which dainty palates now, because they would not want,
Have kindly learned to set, as yearly to transplant. The Radish somewhat hot, yet urine doth provoke; The Cucumber as cold, the heating Artichoke; The Citrons, which our soil not easly doth afford; The Rampion rare as that, the hardly gotten Gourd.

So as we grow some new edible plants in honour of National Gardening Week let’s remember that cultivating them could bring us closer to Shakespeare and his work.