Taking Shakespeare to the great outdoors, 2019 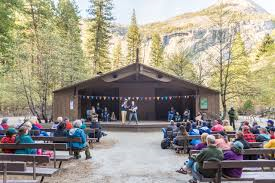 The stage for Shakespeare in Yosemite

Around the UK optimistic announcements are being made for a season of outdoor Shakespeare. Typically, the weather forecast for the beginning of June indicates some unsettled conditions, but fingers crossed for  another fine summer.  The Dell, the RSC’s garden space in Stratford-upon-Avon, hosts its first Shakespeare production on Saturday 1 June with a production of A Midsummer Night’s Dream, and continue each weekend until 1 September.

Over the last few decades outdoor theatre has increased in popularity and the What’s on Stage site now lists a wide range of open air plays including the place where I saw my first outdoor production, Regent’s Park in London and what must be the most spectacular UK venue, the Minack Theatre in Cornwall, perched high on cliffs overlooking the sea. The most ambitious production on offer sounds to be a street theatre adaptation of Melville’s epic whaling novel, Moby Dick to be staged in London.

Back to Shakespeare, a quick internet search reveals productions all round the country. Both Cambridge and Oxford hold their own Shakespeare Festivals, and pop-up Shakespearean theatres will also be seen this summer at York and Blenheim.  While there will be some Shakespeare at the Edinburgh Festival, Glasgow is not to be outdone with stagings at the City’s Botanical Gardens in the City. Now in its 18th year, this is Scotland’s only annual outdoor Shakespeare Festival. Let’s hope for all their sakes that the summer turns out to be dry.

The USA, with more reliable weather, has developed a huge number of outdoor Shakespeare Festivals. Speaking recently to the Shakespeare Club in Stratford Dr Paul Prescott revealed that there are no fewer than 308 of them in North America. In 2014 he was part of the team who toured 14 of these for the Shakespeare on the Road project. The project sought answers to a number of questions such as why we feel the need to fill beautiful empty spaces with Shakespeare, and why, in North America, Shakespeare is so often produced in preference to playwrights like Arthur Miller or Tennessee Williams.

Since then Dr Prescott has been directly involved in the development of a new Shakespeare festival,  Shakespeare in Yosemite, in which for just a few days a single Shakespeare play is performed in the magnificent surroundings of the Yosemite valley in California.  It’s a project in which concern for the environment comes first – the balance of nature is constantly threatened by the presence of visitors – but they have come up with a number of principles designed to draw attention to the valley’s delicate state while also keeping damage to a minimum. So costumes are, as far as possible, recycled or recyclable, performers come from a wide range of backgrounds including Park staff, and there are only a few performances. 2019 is their third year. They began with an hour-long programme that related the park’s first champion, John Muir, to Shakespeare, and followed with A Midsummer Night’s Dream and As You Like It.  Rather than trying to transport a bit of Olde England to this spot the productions relocate to Yosemite itself, replacing English placenames with local ones and giving the fairies in A Midsummer Night’s Dream the names of local flowers instead of Shakespeare’s Peaseblossom and Mustardseed. Unlike most outdoor Shakespeare, too, the productions are staged in April taking advantage of a number of special anniversaries: Shakespeare’s birthday, John Muir’s birthday, Earth Day and Arbor Day. The 2020 production will be Love’s Labour’s Lost.

Created as it has been by academics this unique project could feel serious, even worthy, but it’s obvious from the clips on the website that the productions are designed to be above all celebratory, enriching the experience of visiting this beautiful place which Shakespeare would certainly have treasured.