Walking with Simon Armitage and Shakespeare 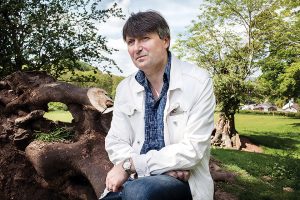 Congratulations to Simon Armitage, who was appointed Poet Laureate on 11 May 2019. It’s a strange job, nominally the official court poet, though these days it isn’t important to write new poems for royal occasions. It’s definitely an honour to be appointed though, and Armitage will find himself in demand to give his opinion on a range of issues even if he doesn’t have to do it in verse.

The history of the UK’s Poet Laureate is rather uncertain, some claiming that early poets including Geoffrey Chaucer were Poets Laureate. Shakespeare’s contemporary Ben Jonson  was granted a pension by James 1 in 1616/17 and followed after the restoration of the monarchy by William Davenant . In 1668 the royal office of Poet Laureate was officially created and conferred on John Dryden by Charles II.   Many of the earliest Poets Laureate were people who had connections with the stage, often adapting Shakespeare’s works in order to fit with the fashions of the time. These include Dryden, Davenant, Thomas Shadwell, Nahum Tate, Nicholas Rowe and Colley Cibber. Only later was it granted to people who were simply poets. From Shadwell onwards it became an appointment for life until Andrew Motion who took the post for 10 years from 1999-2009 and this has now become the norm. Producing poems for special occasions has been optional for a long time.  William Wordsworth is said to have only accepted the post on condition that he did not have to write any. 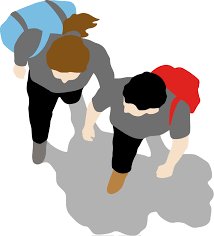 The new announcement comes during May, National Walking Month, which is appropriate for Simon Armitage since he has gained quite a reputation as a walking poet, or troubadour. Twice he has set off on long distance walks, living off the land and giving poetry readings as he went. He has written books about both walks: Walking Home (2012) about walking the Pennine Way, and Walking Away (2015) about walking the first part of the South West Coastal Path from Minehead to Land’s End.

Walking has long been associated with poetry, the Lake Poets often composing as they went on their perambulations. William Wordsworth’s Daffodils, one of the most famous poems in English, was written as the result of a walk that he took with his sister Dorothy.  This site lists some of the best poems about walking, and this site lists walks that inspired some of our best poets including Keats, Gerard Manley Hopkins, D H Lawrence and John Clare, as well as the Shakespeare Way that goes from Stratford to London.

For Shakespeare, walking to get from A to B seems to have been a necessity to be borne rather than enjoyed, with runaways like Imogen in Cymbeline and Rosalind, Celia and Touchstone in As You Like It finding their journeys on foot tiresome. “’Ods pittikins! can it be six mile yet? “ says Imogen, while Touchstone, through gritted teeth, declares “Travellers must be content”. Shakespeare almost certainly made the journey from Stratford to London on foot, at least as a young man, and must have known how miserable it could be.

His most cheerful walker is Autolycus in The Winter’s Tale, who looks out for gullible people to rob on the way. He sings as he walks:

Jog on, jog on, the foot-path way,
And merrily hent the stile-a:
A merry heart goes all the day,
Your sad tires in a mile-a.

Shakespeare also recognised that walking can be good for mental health, with Prospero walking “to still [his] beating mind”, and in Romeo and Juliet Benvolio finding that “a troubled mind drove me to walk abroad”. 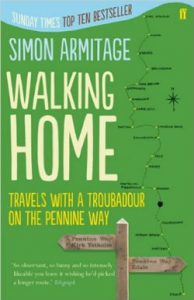 Being out of doors helps Simon Armitage to think clearly too. Here are a few lines from his poem In Praise of Air:

Among the jumbled bric-a-brac I keep a padlocked treasure-chest of empty space, on days when thoughts are fuddled with smog or civilization crosses the street

with a white handkerchief over its mouth and cars blow kisses to our lips from theirs I turn the key, throw back the lid, breathe deep. My first word, everyone’s first word, was air.

So good luck to Simon Armitage and I’m hoping he’ll find time to walk and breathe deep over the next few years.