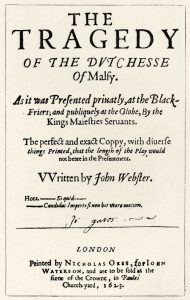 Title page of The Duchess of Malfi quarto

In June 2019 the Shakespeare Institute in Stratford-upon-Avon, is celebrating another of Shakespeare’s contemporaries, John Webster, in the seventh of their marathon playreadings. Webster’s canon is too compact for the three weeks of the event, and this year they are including plays that are known to have influenced the playwright. In order to track these influences, they are reading them in reverse chronological order: with Webster’s words fresh in their minds they will pick up references from earlier works as they appear. Martin Wiggins, who masterminds these events, describes it as “the literary equivalent of searching for the source of the Nile by navigating upstream”. The readings begin on 10 June and full information, including a timetable, can be found here.

The findings of these readings will contribute to Dr Helen Moore’s work on a new biography of Webster. A brief biography is on the British Library’s website.

Webster’s best-known works are the two Jacobean tragedies The White Devil and The Duchess of Malfi. Both are set in Italy, a den of corruption and deception. The Roman scenes, and the character of Iachimo in Shakespeare’s Cymbeline, remind me of the settings and characters of Webster’s plays, but unlike Shakespeare, humour, even black humour, is hard to find in his plays.

T S Eliot remarked on Webster’s love of the gruesome in his poem Whispers of Immortality:

Webster was much possessed by death
And saw the skull beneath the skin;
And breastless creatures under ground
Leaned backward with a lipless grin.

Daffodil bulbs instead of balls
Stared from the sockets of the eyes!
He knew that thought clings round dead limbs
Tightening its lusts and luxuries. 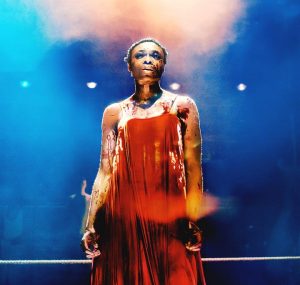 Joan Iyiola as the Duchess in The Duchess of Malfi, RSC, Swan 2018

At the RSC’s recent production of The Duchess of Malfi I did what I have almost never done in my theatregoing life – I left at the interval. This was not a judgement on the production but I was overwhelmed by the sense of claustrophobia and impending violence that had been signalled from the very beginning of the play.  I walked out of what felt like a slaughterhouse into the open air of Shakespeare’s Stratford with a huge sense of relief.

Webster’s first great solo work was The White Devil. He had spent much of his literary life collaborating with other writers, and had struggled to complete it. It was not well received on its first staging but Webster was not prepared to give up on the play, getting it published so it could be read by educated people. He wrote a long and rather endearing explanation To The Reader, that tells us quite a lot about the theatrical world as well as Webster himself.

He excuses the play’s failure at the Red Bull Theatre, blaming the weather “it was acted in so dull a time of winter”, the theatre “ in so open and black a theatre”, and the audience “most of the people that come to that playhouse resemble …ignorant asses” and suggests that even if the audience included many informed people, “the breath that comes from the uncapable multitude is able to poison it”.

Having insulted most of the audience, Webster apologises for writing slowly “I do not write with a goose-quill winged with two feathers” and continues to insult faster writers by implying their work will “only be read for three days, whereas mine shall continue three ages”.

His warmest words are reserved for his fellow-writers, some of whom had been his collaborators: “the full and heightened style of Mr Chapman, the laboured and understanding works of Mr Jonson, the …worthily excellent Mr Beaumont and Mr Fletcher and…the right happy and copious industry of Mr Shakespeare, Mr Dekker and Mr Heywood”. 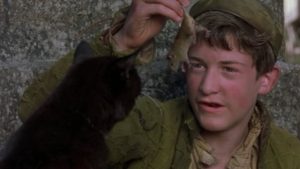 John Webster from the film Shakespeare in Love

Around 15 years younger than Shakespeare, Webster must have been familiar with Shakespeare’s plays, and the two men probably knew each other. Their meeting shown in the 1998 film Shakespeare in Love is pure fiction, but the image of the young Webster tormenting a mouse by dangling it in front of a cat is inspired. He tells Shakespeare “When I write plays they will be like Titus [Andronicus]…I liked it when they cut heads off….Plenty of blood. That’s the only writing”. Fortunately for all of us Shakespeare did not agree, but Webster shouldn’t be dismissed as being interested in only mindless violence.  He was a powerful writer of striking poetry and prose, a unique voice that reflected the turbulent times in which he lived.