A fanciful engraving of Garrick performing his Ode

By the end of September 1769 Stratford-upon-Avon must have been returning to humdrum normality after the excitement of David Garrick’s Shakespeare Jubilee that had taken over the town earlier in the month.

The phenomenon of the Jubilee, however, was far from over. In London, newspapers were full of articles and letters about the events, and critics wrote reviews of the Ode which Garrick had performed so brilliantly.

Garrick had probably always intended to perform the Ode as an afterpiece at his London theatre. Responding to the Stratford performance, song-writer Charles Dibdin wrote “If Garrick felt all this ecstasy and imparted it to his auditors…it was called forth by a contemplation of the prodigious remuneration that would result… While he was infusing into the very souls of his hearers the merits of the incomparable Shakespeare… his soul was fixed upon the Drury Lane treasury”. On his return to London he put the plan into action. The first performance was on 30th September, and he repeated it seven times within the next few months, once before the King and Queen. Garrick reproduced as closely as he could the set-up in the Rotunda in Stratford, right down to a set in the shape of a circular building, fifty musicians and his own statue of Shakespeare. 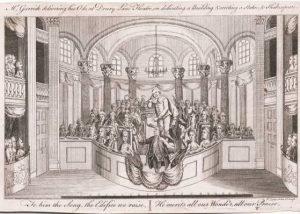 The performance of the Ode at Drury Lane Theatre

Although there had been some criticism of the Ode as a piece of work, there was never anything but praise for Garrick’s delivery of it, or that of the musicians and singers. Even for such a skilled actor as Garrick it was a huge strain. Though it was usual to stage several pieces on the same evening, he never attempted to perform another role on the evenings when delivered the Ode.

Others quickly exploited the interest in the Jubilee. George Saville Carey wrote Shakespeare’s Jubilee, a Masque. It includes fanciful scenes such as Oberon and the fairies from A Midsummer Night’s Dream encountering a drunken Falstaff, forced onto a broomstick by the witches from Macbeth who fly off with him to Stratford. Later the mood becomes sombre as figures from classical mythology, led by the sun-god Apollo and the nine muses, reveal a statue of Shakespeare. Perhaps not surprisingly given the complicated staging, there’s no record of it ever being performed.

Captain Edward Thompson’s long poem Trinculo’s Trip to the Jubilee was published in November 1769. Thompson had attended the Jubilee and although it’s not great poetry, it does give a flavour of the merriment of the occasion. Published during September was the anonymous Garrick’s Vagary: or England run Mad; with Particulars of the Stratford Jubilee. It takes the form of a series of dialogues set before, during and after the Jubilee itself and closes with a song celebrating it:

Let critics dissent, or let them agree,
We’ll sing, and dance round the Mulberry-tree.

The two-act play The Stratford Jubilee, with a prologue Scrub’s Trip to the Jubilee, was written by Francis Gentleman at the same time. He hoped it would be staged at the Haymarket Theatre but this was not to be.

As well as staging the Ode, Garrick was undertaking a much larger Jubilee-related piece that would require all the resources of Drury Lane Theatre and its performers. This was no surprise to anyone in London: the St James Chronicle said  ”it was natural to expect, that the Exhibition upon the Banks of the Avon, would prove a Kind of Rehearsal of a spectacle to be represented during the Winter at Drury-Lane Theatre”. Garrick’s play, The Jubilee, was announced on 14 October, and was a triumph. It began with domestic scenes in a Stratford home, followed by ballads and scenes of preparation for the Pageant, and the Pageant itself.  This was carefully staged with groups from about nineteen of Shakespeare’s plays, each preceded by a banner, the actors carrying appropriate properties such as Shylock with a knife and scales. Drury Lane’s leading actors appeared in their favourite roles, Garrick himself as Benedick in Much Ado About Nothing. It featured the entrance of 320 actors, each group acting out a little scene from their play. Also in the procession was the figure of Apollo with his lyre, and the muses with their trophies. It was universally admired: “the most magnificent spectacle that ever was exhibited on any theatre”, and “there never was an entertainment produced that gave so much pleasure to all Degrees, Boxes, Pit and Gallery”. In its first year alone it was performed more than ninety times to packed houses.

It’s surprising that this crowdpleasing spectacle has been so completely forgotten, so I’m delighted to hear from David Chandler about the project he is leading with Retrospect Opera. They have made and released a professional recording of The Jubilee. It contains the songs and some of the dialogue of Garrick’s dramatic piece. Information about the recording can be found here.

Garrick hadn’t had it all his own way though. While his own play was in preparation, George Colman created a three-act comedy Man and Wife; the Stratford Jubilee, at the rival theatre, Covent Garden, from 9th October. Like Gentleman’s it’s a domestic comedy, mostly set in an inn during the Jubilee. It showed signs of being put together in a hurry: the staging of the pageant of Shakespearean characters was said to be in need of improvement. Such was the enthusiasm for the Jubilee, though, that it enjoyed considerable success until Garrick’s own version was announced on 14 October.

The Jubilee was not forgotten, at least in Stratford. A playbill still exists for a performance in one of Stratford’s converted barns in 1822 of “an interlude taken from the celebrated entertainment of THE JUBILEE, which was founded on the Great Pageant, formerly exhibited at Stratford-upon-Avon, under the direction of David Garrick, Esq, in honour of the Immortal Shakespeare”.