December 12th: a date to remember in Stratford-upon-Avon’s Shakespearean history 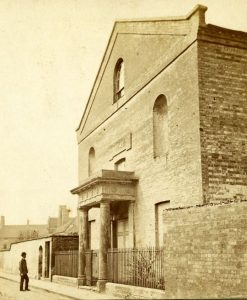 December 12th is probably not the date anybody would choose for an important event. There’s hardly any daylight, the weather’s cold and damp, and everybody’s preoccupied with Christmas and the New Year. It’s true for the General Election in 2019, but December 12th was also the date in 1827 when they opened the first purpose-built theatre Stratford had ever seen, a building that is now almost entirely forgotten.

The date can’t have been a popular choice. When the foundation stone was laid on 23 April thousands of people attending the Birthday Celebrations cheered enthusiastically, and in advance of the opening enthusiasm was high. But that was in springtime. The theatre was expected to be ready during the autumn, when days are warmer and longer, but as the money to buy the land had only been handed over on 23rd February 1827 deadlines were tight. Even by opening night the theatre still wasn’t finished. The Stratford Theatrical Review and Stage Reporter’s first issue described what decorations were in place:

On the ceiling is beautifully represented the four seasons, the circle of the gallery is ornamented with the following devices from the Poet’s Tragedies. Romeo and Juliet, Hamlet, Macbeth, Richard III, Othello and Julius Caesar.; the centre is the statue of Shakespeare being crowned by the tragic and comic muses”. But the lower circle was still to be decorated: “the lower, or box circle is to have corresponding devices from Shakespeare’s comedies…the centre over the stage is represented, the infant Shakespeare in the arms of his favourite muse.

It was declared to be “one of the most compact, and ornamental theatres in the kingdom”. 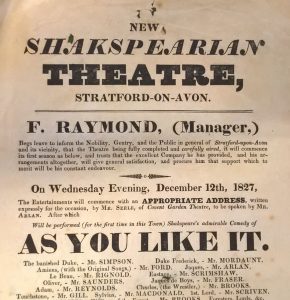 Townspeople were still optimistic, but was the time of year to blame for the poor attendances that were quickly reported ? On the playbill advertising the opening performance of Shakespeare’s sunny comedy As You Like It, audience members were reassured that “the Theatre being fully completed and carefully aired, it will commence its first season”. Warnings like these were often seen when opening new buildings, and catching a chill by sitting in a damp, cold building was obviously a real possibility.

The manager Mr Francis Raymond and his company tended to visit Stratford in the coldest months of the year. Even stars like Edmund Kean and W C Macready visited in November and January respectively. As manager of a circuit of small Midland Theatres including the larger towns of Northampton and Leicester Mr Raymond might not have had much choice.

Another factor was transport: to fill a house with a capacity of around 550 and a population of only two and three thousand they needed to attract people from outside the immediate area, but how was anyone to travel to the town and get home again at the darkest, coldest time of the year?

This must have been an issue because of the relief as soon as the railway came to the town. In 1864 Edward Fordham Flower launched the Tercentenary Festival: a week-long festival of exclusive events mostly held in a purpose-built pavilion, coinciding with the Birthday, followed by a week of events for local people. Railway timetables were widely circulated: it was even possible to get to Stratford from London and back in a day as long as you didn’t mind getting back in the small hours.

It’s hard to believe that the Shakspearean Theatre, in its 45 year history from 1827-1872, never put on a Shakespeare play on Shakespeare’s birthday. There were lots of other festivities and on several occasions individuals read a whole play. But the main event remained an expensive dinner at the Town Hall. It was Charles Edward Flower who saw that the most appropriate way of celebrating Shakespeare’s Birthday was to hold a full performance, by professional actors, of one of his plays, and this realisation is one of the factors that made the Shakespeare Memorial Theatre so successful. It’s lucky for us that Shakespeare was born in April, a much more auspicious and optimistic time than the depressing days of mid-December.

I’m talking about the untold history of Stratford-upon-Avon’s forgotten theatre, that stood on the site of the Great Garden at New Place, on Monday 16 December,  for the Stratford Society.