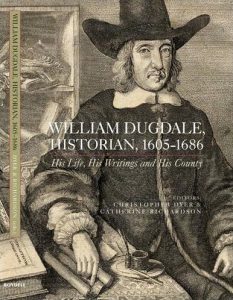 One hundred years ago this week, on 22 January 1920 to be exact, the Dugdale Society was formed with the aim of promoting the history of Warwickshire. Over the past century the Society has grown to be a significant force. It has now published fifty-two volumes of edited texts of important county records and a series of Occasional Papers based on lectures delivered at its annual meetings.

Sir William Dugdale (1605-1686) was the most important historian the county has produced, even though his name is not generally well known. Born in Shustoke, in the north of Warwickshire, and educated in Coventry, Dugdale took an interest in historical research and was appointed to a post within the College of Arms, eventually becoming Garter King of Arms in 1677. He published a number of books including a history of Saint Paul’s Cathedral but his best-known work is The Antiquities of Warwickshire, published in 1656. Not surprisingly, his interest in heraldry is to be seen in all his works.

I’ve referred to some of the Dugdale Society’s publications where they have related to Shakespeare, both here and in my jointly-authored history of Stratford-upon-Avon’s Shakespeare Club. Stratford has always been well-represented, not least because the founder of the Society, Frederick Wellstood, was the Secretary and Librarian of the Shakespeare Birthplace Trust until his death in 1942. And the SBT is still the official address of the Society.

Anyone interested in the biography of Shakespeare will also be familiar with Dugdale’s name. Although a child when Shakespeare died, Dugdale was perfectly aware of this Warwickshire lad. The Stratford-upon-Avon section of his Antiquities of Warwickshire contains the following sentence “One thing more, in reference to the ancient Town is observable, that it gave birth and sepulture to our late famous Poet Will. Shakespeare, whose Monument I have inserted in my discourse of the Church.” 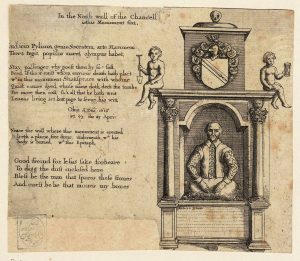 Shakespeare’s monument, as in Dugdale’s Antiquities of Warwickshire.

Dugdale’s book contains many engravings of important memorials, and as he indicates above this included the first published illustration of Shakespeare’s monument in Holy Trinity Church. This illustration has itself become the source of some controversy, as it is sometimes cited as evidence that William Shakespeare of Stratford was not the author of the works that bear his name. It’s thought that Dugdale made a rough sketch at the time of his visit to the church, from which a finished engraving was made. In Dugdale’s version Shakespeare’s hands are both placed on what seems to be a bulging bag (a sack of wool?), rather than holding a quill pen above a cushion bearing a piece of paper as in the Church monument. Anti-Stratfordians claim that the monument was changed later in order to include the detail of the quill. It’s a strange claim, since Dugdale goes out of his way to note that Shakespeare was a poet, and includes all the lines from the monument about his importance as a writer. The idea that the monument was changed during its restoration in the 1740s is also easily refuted since George Vertue made a sketch of the monument in 1737 clearly showing Shakespeare holding a quill.

Dugdale’s remains, though, the first printed illustration of the monument, and the first publication of the verses. His diary is also the source of the information that Gheerart Janssen was the creator of Shakespeare’s monument.

In order to honour and celebrate its centenary as a publishing society, the Society is holding a conference in Stratford-upon-Avon on 16 May 2020. Titled Warwickshire’s Changing Past the contributors will show how, during the past century, British society, politics and culture has changed profoundly, and how historical writing of all kinds, both local and national, has reflected those changes. As well as looking back, they will consider current and future developments in subject matter and approach. Full information about the Society and its conference can be found at the Society’s website.