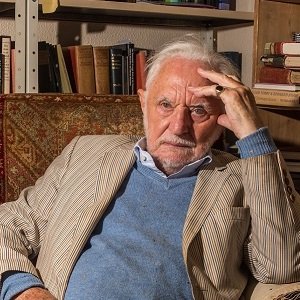 So how are you going to be celebrating Shakespeare’s birthday in 2020? With everybody in lockdown and all actual events cancelled, it’s tempting to forget the whole thing. But here in Stratford-upon-Avon people are determined to mark the day virtually.

The most notable series of events will be the lectures by Sir Stanley Wells coinciding with his own 90th birthday, entitled What was Shakespeare really like? Originally planned as four actual lectures to be delivered during May and June, the lockdown will enable many more people to hear them as podcasts every Thursday for the next four weeks. The first will be aired on Thursday 23 April. Chaired by Professor Russell Jackson of the University of Birmingham, Sir Stanley will discuss the question “What manner of man was Shakespeare?”. Later lectures will ask “How did Shakespeare write a play?”, “What do the Sonnets tell us about Shakespeare?” and “What made Shakespeare laugh?”.

Sir Stanley has been closely associated with all the major Shakespeare organisations in the town, and is rightly known as the world’s leading Shakespearian. Still closely involved with the Shakespeare Birthplace Trust, his office is in the Shakespeare Centre next door to the Birthplace itself. Although all its actual sites are closed for now, the SBT is organising a virtual event designed to be a reminder that Stratford and its people will be back. Here’s a description of what they’re planning. 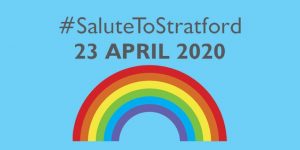 “We’re going to give a massive #SaluteToStratford across social media to mark the 456th anniversary of our Bard’s birthday on 23 April.  Stratford-upon-Avon is the beating heart of the global Shakespeare story and we want to celebrate our community here with the world.”

“You might have a favourite spot, a cherished memory, or an imagined itinerary for a future visit. Anything goes, so share your stories on social media on 23 April using #SaluteToStratford. “

One of the things that’s most heartening about the current crisis is the inventive ways people are finding to use their time in creative ways. The Royal Shakespeare Company is tapping into this trend: “Film or photograph your Shakespeare in any way you like and upload it to your Instagram, Twitter or Youtube, tagging @theRSC and using the hashtag #ShareYourShakespeare.” They’ll be sharing them for the next few weeks. As they say, no idea is too silly: one of their suggestions is that you might like to recreate the balcony scene from Romeo and Juliet using vegetables. or, more conventionally, draw or paint your favourite scene. 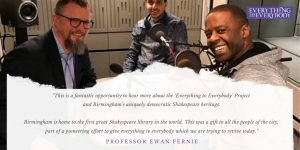 The Shakespeare Institute in Stratford is part of the University of Birmingham, and Professor Ewan Fernie is managing the Everything to Everybody project, opening up the Birmingham Shakespeare Memorial Library to the people of the city. On Shakespeare’s Birthday Professor Fernie and actor Adrian Lester talk to Islam Issa about Birmingham’s First Folio and about George Dawson, the man who founded the Library and brought the Folio to the city. It’s being broadcast on BBC Radio 3 at 10pm.

Moving to another great Shakespeare Library, the Folger Shakespeare Library in Washington, DC is organising its own virtual events beginning at 11am Eastern standard time (five hours behind the UK), and continuing until 7.30pm (12.30 UK time). Starting with a discussion about “Why do Fabulously Creative People Like Shakespeare” they move on to “Home-Schooling at Shakespeare’s Table: The Meaning of Meals in The Taming of the Shrew”, and that’s just before lunch. The day rounds off with a screening of a performance of Macbeth.

These are just a few of the ideas people have come up with, others including readings of plays and sonnets, performances of Shakespeare’s songs and talks on lots of different subjects. Although they are concentrated here in Stratford-upon-Avon, this outpouring of Shakespeare-related celebration goes to show how important his works are to people from all countries and all cultures. 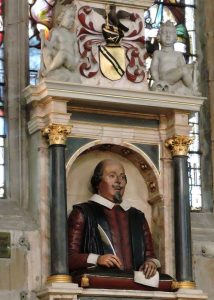 For me, I’ll be celebrating Shakespeare’s birthday quietly, wearing a sprig of rosemary for remembrance, taken from a plant in my own garden in Stratford-upon-Avon. My daily walk will take me down to Holy Trinity Church, closed for now, and to the path alongside the River Avon to the Royal Shakespeare Theatre. I’ll read some of my favourite speeches and remember some of the great performances I’ve been lucky enough to enjoy.  On Saturday, when the town would normally be heaving with visitors, flags flying, bands playing, the Town Council dressed in their official robes, I’ll be putting up another post including photographs of Birthdays from the past.