Easter at Anne Hathaway’s in lockdown 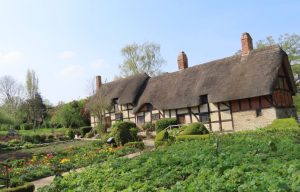 Describing Easter, Nicholas Breton in Fastasticks wrote “There is mirth and job where there is health and liberty…I conclude it is a day of much delightfulness: the sun’s dancing day and the Earth’s holiday”. It’s also a time of hope and love. No place associated with William Shakespeare could be more appropriate at this time of year than Anne Hathaway’s Cottage, the thatched farmhouse beautifully situated in the little village of Shottery, where Shakespeare wooed his wife-to-be. Normally, at Easter, the Cottage would be heaving with tourists, enjoying the picturesque house, beautiful garden and blossom-filled orchard.

Alas, that’s not how it is in 2020. On Good Friday afternoon I took a walk out to Shottery. For several years I lived in a cottage almost next door to Anne Hathaway’s and in the season got used to queues of people waiting to get in, and coaches dropping their passengers off right outside our house. Even though nobody has to stand by the road on the way to the ticket office any more, at this time of year the place would still be buzzing with people from all over the world. How strange then to find the whole place deserted – even the road outside the cottage is currently closed off so there is no passing traffic. Perhaps we should be grateful – this peaceful scene is probably much more how it would have been in Shakespeare’s day, but as anyone who has worked in tourism knows, Easter is the most important weekend of the year, after winter months of just ticking over. It didn’t feel as if we should be celebrating. 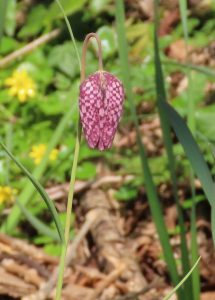 We had the place, then, almost to ourselves. The whole property is closed, including the brook walk, but looking over the fence we could see how it’s currently at its most lovely, full of spring flowers including many snake’s head fritillaries. These lovely plants with their mottled flowers are thought to be the ones that Shakespeare describes in Venus and Adonis, the blooms into which Adonis is metamorphosed after death. He’s likely to have chosen them instead of the traditional anemone because they were fashionable, having only recently been imported into the country.

By this, the boy that by her side lay kill’d
Was melted like a vapour from her sight,
And in his blood that on the ground lay spill’d,
A purple flower sprung up, chequer’d with white,
Resembling well his pale cheeks and the blood
Which in round drops upon their whiteness stood.

It’s a story of love and loss, of a kind of resurrection after the tragedy of death, appropriate for Easter in any year. During these uncertain, frightening times, keep safe and look forward to another year when Shakespeare’s Stratford-upon-Avon will be there to welcome you. Here are some of our photographs of Shottery in lockdown which I hope people will enjoy. 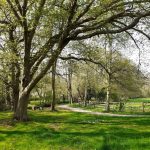 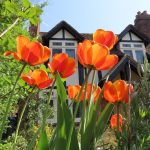 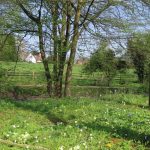 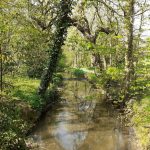 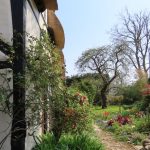 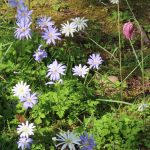 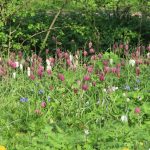 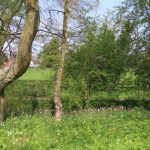 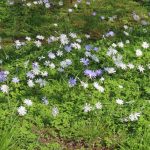 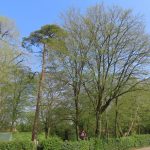