Unfreezing the statue: rescuing the arts

It is always said that “The show must go on”. But since 16 March 2020 when theatres and other cultural venues closed, shows have not gone on. And while shops and pubs are now able to open again, live performances are not allowed, and no timetable is attached to the Culture Secretary’s five-point-plan for the arts. High-profile people from the sector have been putting pressure on government for several weeks, and at last a rescue package has been announced. It came on the day after pubs were allowed to re-open, on Sunday 5 July, as the RSC’s production of Much Ado About Nothing screened on BBC4. £1.57 billion, a serious amount of money, is being made available. 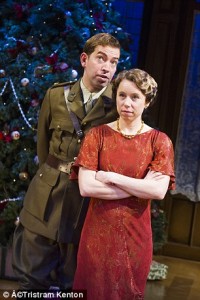 Edward Bennett as Benedick, Michelle Terry as Beatrice, Much Ado

It won’t solve all the problems, however. The main criticism is that this money is for venues and institutions, not for individuals. In Greg Doran’s interview with the Stratford Herald several weeks ago he called for “a package of support for the army of freelances who are self-employed who have been so badly hit”, and violinist Tasmin Little has tweeted that “a huge proportion of freelancers (40%) simply don’t qualify for this scheme & fall completely through the net… we haven’t been able to earn anything.” Meanwhile National Treasure Dame Judi Dench has spoken about the closure of performing spaces. “It doesn’t just affect the public, it affects all of us – not just actors, but the crew and the people who make wigs, the people who dress us, the stage doormen, the lighting… the people in the box office – everyone’s affected by it, and none of us have any security or knowledge to know when it will come back”.

At the same time as the government’s announcement came another, that seems to have been completely overlooked. The Theatre Artists Fund has been given £500,000 by Netflix to help individuals who are struggling, and has come out of the suggestion by Sam Mendes that commercial organisations which gain from the work of performers could put some money back.

Life in the theatre has always been risky. Professional theatre was relatively new in Shakespeare’s time, and during the regular outbreaks of plague, all public assemblies were banned in the capital, for months or even years. Early in Shakespeare’s career, in 1592, an epidemic began that would last two years. With no support at all, theatrical companies were forced to go on tour to the provinces, but Shakespeare chose to go in search of a patron by writing his long poems Venus and Adonis and The Rape of Lucrece. When the outbreak came to an end in 1594, Shakespeare probably became a founder member of the Lord Chamberlain’s Men along with Richard Burbage and Will Kemp, under the patronage of Henry Cary, first Lord Hunsdon. The end of the plague signalled the start of an enormously creative period of Shakespeare’s life.

Gregory Doran notes that Shakespeare’s response to a later spell of plague, in 1603, could have been quite different. “The plays suddenly seem to plunge into an abyss – you have dark tragedies: King Lear, Othello and Macbeth… I had never really contemplated how insecure the plague must have made everyone – it must have removed people’s sense of certainty and intensified their anxiety.”

It will be many months before live performances can take place again in theatres and concert halls, but who knows what the results might be for our creative artists. Some progress is already being made: in a spirit of optimism, perhaps even defiance, Ian McKellen, at the age of 81, is going to play Hamlet. The play will be performed at the Theatre Royal Windsor, the “first major UK theatre production post-Covid to start rehearsals”. No matter how unusual the circumstances will be for the audience, it will be sure to help everyone’s emotional wellbeing to see a return to normality. Greg Doran has spoken about how important it is to get Shakespeare’s plays back onstage: “Seeing the statue unfreeze at the end of The Winter’s Tale will be like a lifting of that weight”. 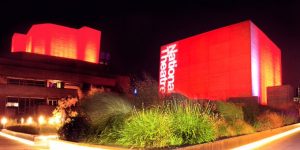 The National Theatre bathed in red light for #lightitinred

The government’s money won’t solve all the problems of the Covid-19 crisis so how can individuals help? You can support your favourite venue or organisation by making a donation, and write to your local MP asking him/her to keep pushing for help for freelancers. If you’re on Twitter, you might like to follow the #lightitinred campaign that is drawing attention to the critical condition of the UK’s live event and entertainment industry. And let’s all hope it won’t be for too long.