Charles Dibdin and the music for Garrick’s Jubilee

Posted on September 6, 2020 by Sylvia Morris 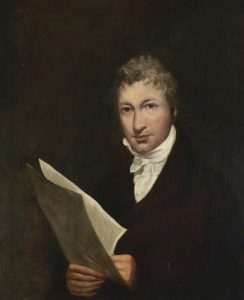 Early in the morning of 6 September 1769 the Shakespeare Jubilee began with cannon fire, bell-ringing and, charmingly, a group of musicians walking the streets of Stratford-upon-Avon singing The Morning Address, with words by David Garrick and music by Charles Dibdin.

Let Beauty with the sun arise,
To Shakespeare tribute pay,
With heavenly smiles and sparkling eyes
Give lustre to the day.

Although it was Garrick’s Jubilee, it also belonged to the musicians and composers. The two most important composers were Charles Dibdin and Thomas Arne. Arne’s Oratorio Judith was performed,  and he composed the music for Garrick’s Ode, but it was the young Dibdin’s music that permeated the three-day festival. Most of it has never been recorded, but in 2019 Retrospect Opera released their CD The Jubilee making Dibdin’s compositions for the event available at last. The Jubilee was the first Shakespeare Festival anywhere in the world, and it was very different from what we expect today from a Festival. Its aim was never to perform Shakespeare’s plays, many of which were regularly staged in London and were available in print. The notes accompanying the CD explain that is was seen as:

a proper opportunity to pay homage to the sublime genius behind the plays, a man whose total imaginative reach far transcended what any one play…could hope to achieve. But Garrick had no intention of placing Shakespeare on a lofty pedestal, remote from popular culture. Quite the contrary; part of his play was to establish the Bard as a sort of folk hero, the people’s poet – the literary equivalent of Robin Hood…To this end, Garrick penned the lyrics of a number of songs celebrating Shakespeare not just as a literary genius but also as … a likeable rogue.

Part of the last verse of The Warwickshire Lad describes Shakespeare:

There never was seen such a creature,
Of all she was worth he robbed nature;
He took all her smiles, and he took all her grief,
For the thief of all thieves was a Warwickshire thief.

Dibdin and Garrick inevitably fell out, but were reconciled just in time and the songs were some of the most successful parts of the Jubilee. The CD includes them, as well as other little-known delights. Rarely mentioned in accounts of the Jubilee are details of the concert that participants heard after dining in the Rotunda on the first day. It included Dibdin’s cantata Queen Mab. The CD notes again: “Of everything heard on the first day, this gave clearest expression to the Bardolatry inspiring the Jubilee…[The] sentiments closely anticipate those of Garrick’s great Ode”. Based around the Queen Mab speech from Romeo and Juliet that is based on popular folklore, it praises Shakespeare as “heaven’s most favor’d creature, Truest copier of Nature”, and fantasises about the queen of the fairies’ arrival on the banks of the Avon (with echoes of Cleopatra’s barge):

The cantata was so successful that Dibdin published both words and score, but it has not been previously recorded.

While the Jubilee is thought of as a disaster, the first day was in fact a triumph. On days two and three the weather prevented the pageant of Shakespeare characters from taking place, but only a few weeks later Garrick took the idea and turned it into a spectacular presentation at his London theatre Drury Lane. In order to make it work, Garrick added some comic scenes featuring Warwickshire rustics and an unfortunate Irishman. These scenes, together with Dibdin’s successful songs, were performed as The Jubilee, premiering on 14 October 1769. It was performed 91 times in its first season, setting a record. For the first time, Retrospect Opera attempts to present it, focusing on the songs and including large chunks of the dialogue (all the words are reproduced in the pamphlet accompanying the CD). 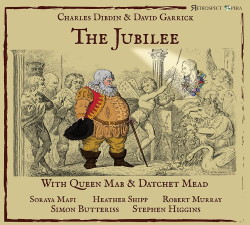 I’ve thoroughly enjoyed listening to this CD and finding out about Charles Dibdin’s work. It also includes another piece with Shakespearean connections, Datchet Mead, or The Fairy Court, written nearly 30 years later, with obvious references to The Merry Wives of Windsor. Dibdin (1745-1814) is nowadays little-known, but some of his melodies are familiar. The tune of The Warwickshire Lad, written for the Jubilee, is the regimental quick march of the Royal Warwickshire Regiment. Dibdin’s most famous song, though, is Tom Bowling, a lament to a Royal Navy lieutenant who died in the service of his country. It is now part of the medley of British Sea Songs performed at the Last Night of the Proms. This link takes you to the lively event in 1993, and this one to a recording by baritone Roderick Williams (who happens to live near Stratford-upon-Avon).

I would like to acknowledge the help of David Chandler, Executive Producer of Retrospect Opera, who wrote the admirable notes which I have quoted, as well as providing me with a copy of this delightful recording.