The second week in October is when Stratford-upon-Avon’s Shakespeare Club normally begins its season, when up to a hundred members meet in the Music Room at Mason Croft, Marie Corelli’s house and now the home of the Shakespeare Institute for talks by a range of lecturers, followed by questions and a lot of chat over refreshments. It’s a traditional setting that suits the Club, which is now nearing its 200th anniversary.

2020 is of course very different, and rather than give up until conditions improve, the Club’s committee has decided to try something a bit more 21st-century. So on Tuesday 13th October we are offering our first virtual meeting. We’re hoping this will still have the flavour of a Shakespeare Club meeting so will follow roughly the same format. It’ll be pre-recorded, avoiding (we hope) technical glitches and will be available for three days.

The talk on Tuesday will be one of those we had to cancel earlier in the year because of lockdown, Dr Rebekah Owens on the influential academic Frederick Samuel Boas  who was one of the first University Extension lecturers. In her words, “ In the fifteen years he worked for the scheme, Boas encountered some very familiar problems for teachers in higher education. In trying to realise the social and reformative aims of the Extension programme, Boas struggled with the question of how such a scheme should be funded and what its value to the wider society could possibly be. In discussing how he overcame these problems, this talk provides an insight into the sometimes troublesome, but never dull process of getting not just Shakespeare, but English Studies itself recognised as a suitable subject for teaching in schools and universities.” 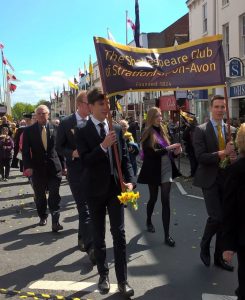 While we all regret the temporary loss of the live event, delivering meetings virtually may have some benefits. Normal meetings are only available to those able to get here for Tuesday evenings. Now people can listen at a time that suits them. While we would normally have to charge for our sessions, we are able to offer the first couple of sessions to anyone who signs up to our free mailing list. For the first time, wherever you are in the world you’ll be able to take part. And this is extremely appropriate: the Shakespeare Club was set up by locals, for locals in 1824, but over the two hundred years since it was formed, it has contributed significantly to the world-wide celebration of Shakespeare with Stratford-upon-Avon as the centre. If, of course, you would like to join the Club you will be more than welcome to do so and full information is on the website .

To be put on the mailing list, email stratfordshakespeareclub@gmail.com and on Tuesday 13 October we’ll send you an email containing the link you need to access the meeting. This will remain live for three days. We look forward to hearing from you and we hope you will enjoy the meeting, though you’ll have to supply your own refreshments!