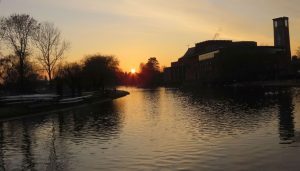 The River Avon and Royal Shakespeare Theatre as the sun sets, November 2020. Photo by Richard Morris

November 2020 is drawing to a close in Stratford-upon-Avon, and although we haven’t yet experienced the cold of winter “when blood is nipped”, we have had enough rain for “ways [to] be foul”, as Shakespeare describes at the end of Love’s Labour’s Lost.

Luckily, during this second period of lockdown to help reduce infection levels, we have rarely had to put up with the days described in Thomas Hood’s poem November:

No sun – no moon!
No morn – no noon –
No dawn – no dusk – no proper time of day.
No warmth, no cheerfulness, no healthful ease,
No comfortable feel in any member –
No shade, no shine, no butterflies, no bees,
No fruits, no flowers, no leaves, no birds! –
November!

In town, takeaways are busy, as are riverside walks as people stroll in careful pairs. Locals were looking forward to fewer limitations on life after 2 December, but a few days ago it was revealed that Stratford-upon-Avon, along with the rest of Warwickshire, was to be placed in Tier 3 of restrictions when lockdown ends, to be reviewed on 16 December.

It’s bad news for all of us, but in particular for the town’s Shakespeare-related attractions. Shakespeare’s Birthplace had been welcoming visitors again since August, and was hoping to re-open again in December, but these plans have now been put on hold.  Although only that one out of the five Shakespeare houses has been able to open this summer, the influx of UK tourists must have helped businesses in a town that depends so much on visitors.

The Royal Shakespeare Theatre has been even more severely hit, with no live shows at all since March. They had been hoping to begin live performances again from 12 December, but these are now being delayed to 19 December assuming that the town will be lifted into Tier 2 and then we move into the lighter restrictions planned for Christmas.

The last nine months has been particularly difficult for theatres, and having to restrict even further their live performances is painful for all. This is an extract from the RSC’s latest press release.

Following the latest government announcement, the RSC will now offer live-stream only versions of all shows taking place between Saturday 5 and Saturday 12 December which will be available for one week after broadcast, with a view to welcoming audiences back to the theatre from Saturday 19 December. Full Covid-19 safety measures will be in place to make sure that up to 200 audience members can see events socially-distanced in a safe atmosphere, with the RSC welcome remaining as strong as ever.

One of the offerings from the RSC, which will it seems go ahead as a live stream no matter what, is Festive Tales, a weekend of music and reflection, on 19 and 20 December. This will feature carols, songs and festive readings celebrating the spirit of Christmas and the Royal Shakespeare Community. We all hope that our theatres, museums and other cultural events will be able to resume soon. 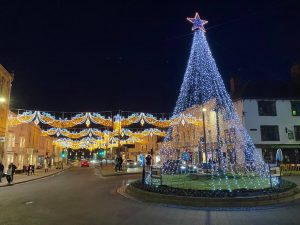 Both SBT and RSC are still running their online shops for those Shakespeare-related Christmas presents, and both are putting on online events.

And although so many shops are closed, the town is still putting its party hat on with the traditional Christmas lights burning bright after dark, bringing some cheer to the dark evenings. The photo of the lights in Bridge Street was taken recently by another Stratford resident, Andrew Anderson.

Like the Duke’s court, exiled to the forest in As You Like It, we have to remain isolated for a few more weeks, and to make the best of it. Shakespeare knew how important it is to find solace in the natural world in times of hardship.

And this our life, exempt from public haunt,
Finds tongues in trees, books in the running brooks,
Sermons in stones, and good in everything.