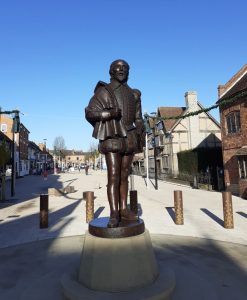 Even for those unaffected by the virus, it’s been a dreary year with few opportunities to enjoy the things we’d say make us human: music, dance, drama, and interacting with our friends and family. Shakespeare’s plays are full of love and loss, often ending with reconciliation and meetings of families long parted, from the early Comedy of Errors, through Twelfth Night to the magical rebirths of The Winter’s Tale and Pericles. I’m hoping that when we are able to meet again we experience an explosion of creativity, and never take for granted the arts and those who bring them to us. They have suffered great hardship in the last few months.

Stratford-upon-Avon itself has had a tough time during the pandemic: not so much in terms of the illness itself as our levels of infection have been low, but the economic effects have been severe. Theatres are closed, all the Shakespeare properties have been closed except, for a few months in the summer, the Birthplace, Holy Trinity Church, the Guild Chapel and Shakespeare’s Schoolroom all shut their doors. The town’s many hotels, restaurants, cafes and shops that rely on visitors have been forced to close or reduce their offerings. And allowing pedestrians more space led to some streets being closed to traffic.

But amongst all this, there has been one new Shakespeare attraction in town – and it’s proved perfect for this year, and sited in Henley Street, usually busy with tourists visiting the Birthplace. With the Birthplace closed, it has been great to have something for the tourists who come here, in the shape of a new Shakespeare statue by artist James Butler.

It’s been controversial for several years: it was originally intended to stand at the top of Bridge Street. But siting it at such a busy traffic intersection would have reduced the numbers looking at it. Other suggestions included the rather small patch of ground near the Town Hall, already overlooked by two images of Shakespeare. I wasn’t keen on this statue when it was first proposed,  but within days of it being unveiled, every time I passed people were taking photos of their families standing around the base of the statue with Shakespeare’s Birthplace in the back ground, and I’m happy to admit I was wrong.

The new statue offers a kind of easy familiarity that isn’t possible with most images of Shakespeare to be found in the town. The church bust high on the wall inside the church, the Garrick statue high on the Town Hall wall, the Gower Memorial in which Shakespeare is isolated, high above his characters. At the time when this was unveiled it was surrounded by a fence, and an admission charge was levied for people to get into the gardens where it stood. Times have changed: now we expect our heroes to be accessible. 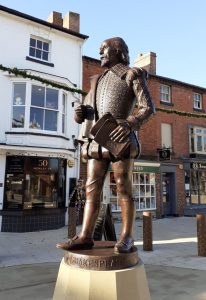 I took these photos of the new statue in early November, before our second period of lockdown began, and when we experienced some beautiful golden autumnal days. We’re now entering Tier 4, with many restrictions in place to help reduce infection levels. We’re all hoping that Stratford’s unwelcoming face is only temporary and by springtime, when many of us will have received our vaccines and travel restrictions are removed, we will be able to welcome visitors back to enjoy its unique atmosphere and attractions.

So here’s to a happier 2021, one in which we hope there will be a lot more Shakespeare, more theatre,  and more opportunities for “merry meetings”.