Remembering the Duke of Edinburgh in Stratford-upon-Avon 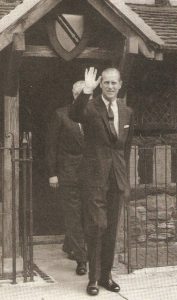 Today, 9 April 2021 we’ve all heard the sad news that Prince Philip, the Duke of Edinburgh has died aged 99. He’s been one of the most recognizable figures in public life for as long as any of us can remember.

Much has been made already about his role as the longest-serving royal consort in British history, describing how he was always a step or two behind the Queen, only rarely carrying out public engagements on his own.

But one of those solo visits was made to Stratford-upon-Avon for the biggest celebration of Shakespeare’s life in history, the Quatercentenary of Shakespeare’s birth on 23 April 1964. People in Stratford may well have memories of this day. The Queen was unable to attend, having given birth to Prince Edward only a few weeks before.

He brought his characteristic energy to the rather breathless 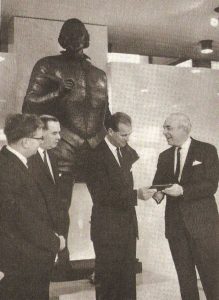 schedule. Having landed by helicopter, he took part in most of the festivities as well as carrying out some important official functions. He spent the day visiting the newly-opened Shakespeare Centre and the Birthplace in Henley Street, being the chief guest at the official luncheon, opening the Shakespeare exhibition on Waterside, meeting Peter Hall and Governors of the Royal Shakespeare Theatre, and attending a matinee of Henry IV Part 1. Not known as a theatre fan, but well known for his sense of humour, this play that includes Falstaff’s most exuberant comedy was wisely chosen for him.

This was not his first visit, however. He had accompanied the Queen on their first Royal Visit in 1957, and his most recent visit, with the Queen, was for the official reopening of the Royal Shakespeare Theatre after its reconstruction, in March 2011.

He will be greatly missed. “Out, out, brief candle”. 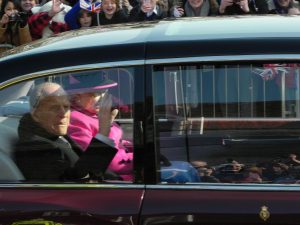