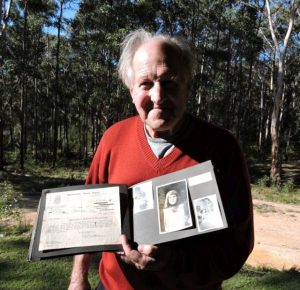 This morning, 21 August 2021, my brother-in-law, James (Jim) Morris died in hospital in Australia, where he had lived for over sixty years. Although he had left Stratford as a teenager and his subsequent life was full of adventure he never forgot Stratford-upon-Avon. Sometimes local people seem to want to ignore the town’s Shakespearean heritage, but Jim always remembered that it is this that makes the town special and was proud of the contribution he had made towards it.

Over the past few years I’ve written a couple of blog posts about Jim, and in his memory I’m including links to them for anyone who is interested in this local boy’s experiences. The first was about the staging of the casket scene in The Merchant of Venice, including his recollection of how it was done in 1953 when he was one of three local boys chosen to be casket bearers. He was at the time head choirboy at Holy Trinity Church and as well as having a beautiful voice he was used to performing in public. He retained a great love of music throughout his life.

Staging the caskets: The Merchant of Venice

The second was written after I had visited Jim at home in New South Wales, where he showed me the memorabilia he had kept and carried with him after he emigrated. These included a photograph album containing a signed photo from Peggy Ashcroft (Portia), informal photos of the boys having fun, and a design sketch showing how his wig for Richard III was to look. Somehow the little pottery pig that Peggy Ashcroft had given him on the press night of The Merchant of Venice had also survived. I was amazed how much he had kept, but even after an incident-filled life and many moves Jim still treasured these items. Handling them brought back recollections which he was delighted to share. His pride in his contribution to the Theatre’s work, too, was clear.

Shakespeare memories from the Bush

Jim was blessed with an extraordinary memory, and those of us who knew him will remember him telling stories of the Stratford of his youth. We will all miss him, but how lucky he was to be involved in the work of the town’s Shakespeare organisations, giving him opportunities to remember so vividly even from the other side of the world, and many years later.