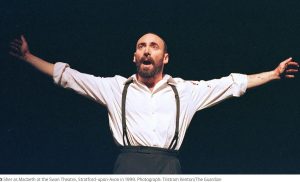 This morning, 10 December 2021 was bright and sunny in Stratford-upon-Avon. We headed for the river for a walk while the sunshine was strong at this, the darkest time of year. Approaching Holy Trinity Church, where Shakespeare is buried, we heard the slow toll of a single bell. A funeral. As we neared the west entrance to the churchyard we could see people, including actors and people from the theatre, striding along the path to the church. Tony Sher.

It became a pensive walk. Passing the Royal Shakespeare Company’s theatres we remembered some of those roles we’ve seen Tony Sher perform over a period of well over thirty years. His Shakespeare career at the RSC began with the Fool in King Lear in 1982, memorably wearing a red nose, and ending with King Lear himself. In between, so many extraordinary performances: Richard III of course, Shylock, Malvolio, Vendice in The Revenger’s Tragedy, Tamburlaine, Macbeth, Leontes, Prospero, Falstaff. More recently, in modern plays: Willy Loman in Death of a Salesman, Kunene and the King. I particularly remember his outrageously funny Tartuffe, performed at the RSC’s intimate theatre the Pit at the Barbican. I’ve heard several accounts over the past week of how much painstaking preparation he put into creating performances that sometimes felt on the verge of being out of control.

You will have your own memories, and since the RSC’s announcement of Tony’s death on 3 December there have been many tributes including this one. You don’t need me to tell you what a powerful presence he bought to everything he did. Hearing Judi Dench trying to define his quality, and clips of his King Lear have  reminded me how ephemeral and elusive theatre performance is. 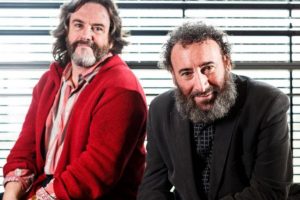 This afternoon, back from another walk before the light faded, I received a message from a friend that the BBC’s Last Word, coming on in minutes, was to include a tribute to Tony Sher from his husband, the RSC’s Artistic Director Gregory Doran. They have formed an extraordinarily powerful partnership in the world of theatre, and not just in the UK.

Hearing Gregory Doran speak about their life together was very touching, and the best tribute Tony Sher could have wished for. “He was my all the world, and I’ll miss him very, very much”.