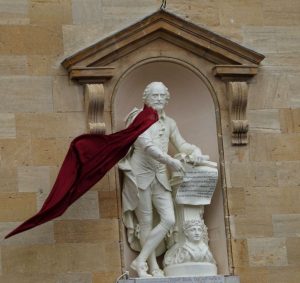 The restored statue is revealed

On Friday 22 April 2022 the project to restore the 1769 statue of Shakespeare to the Town Hall was finally completed. I wrote recently about the process of conservation and placing the statue back in place. The money to carry out the work was raised through a community project that is also worth remembering. Rev Dr Paul Edmondson, Head of Research at the Shakespeare Birthplace Trust, challenged local people to raise funds to restore the statue by a marathon reading of Shakespeare’s works entitled Shakespeare’s Coming Home!

From 1 to 12 March 2022 readings took place in the beautiful ballroom of the Town Hall. Famous actors including Harriet Walter, David Troughton, Michael Pennington and Janet Suzman all took part but perhaps more significantly so did hundreds of local people from businesses, cultural organisations and educational establishments. 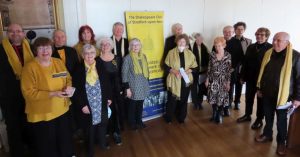 Examples included Pericles read by the Greek restaurant El Greco, Titus Andronicus read by Stratford Town Walk, Romeo and Juliet by Playbox Theatre, and Richard II led by St Andrew’s Church Shottery. Stratford’s own Shakespeare Club read All’s Well That Ends Well. The Club has links with the Town Hall going right back to its earliest days in the 1820s when it was the only Shakespeare organisation in the town.  The project was carried out in conjunction with Stratford’s leading jewellers, Pragnells, which matched the funding raised by local donations. In the end, the aim of £45,000 was raised. 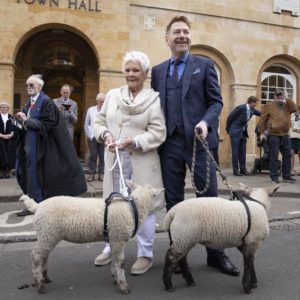 So Stratford-upon-Avon’s first Birthday Celebrations since 2019 began in fine style with the official opening of the statue with Dame Judi Dench and Sir Kenneth Branagh removing its temporary cover. Both actors also received the Freedom of the Town of Stratford-upon-Avon, an honour also given to David Garrick in 1769 who originally gave the statue to the town.  David Garrick, like Dame Judi and Sir Kenneth, was the most celebrated Shakespeare actor of his day. Asked what privilege she would like to exercise as Freeman of the Town, Judi Dench asked to be allowed to herd sheep up the Town’s Sheep Street. The sheep were friskier than anticipated as you’ll see if you watch the video created by the Stratford on Avon Herald. It was a charmingly entertaining part of the event, but I think we can be sure that David Garrick didn’t do anything so undignified.