Music and dancing for Queen Elizabeth 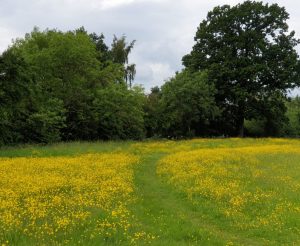 Buttercups in a Warwickshire field. By Phil Mills

We’re just reaching the end of the merry month of May, and about to embark on a weekend of celebrations for the Platinum Anniversary of Queen Elizabeth II’s accession to the throne. Events, many of them outdoors, will be taking advantage of the long days and good weather is forecast for much of the time. The UK’s outdoor spaces, whether gardens, public parks or countryside, are looking fresh and beautiful. And after two difficult years, people are ready to enjoy them.

Although much has been made of the eating and drinking part of the festivities, it wouldn’t be a proper celebration without music and dancing. Shakespeare-lovers will remember the sheep-shearing festival in The Winter’s Tale,  which onstage can turn into riotous, bacchanalia. That party takes place later in the summer, after the hard work of shearing the flock is over. This week has more the feeling of one of the songs in As You Like It, looking forward to the summer and better times ahead:

It was a lover and his lass,
With a hey, and a ho, and a hey nonino,
That o’er the green corn-field did pass
In the spring time, the only pretty ring time,
When birds do sing, hey ding a ding, ding.
Sweet lovers love the spring. 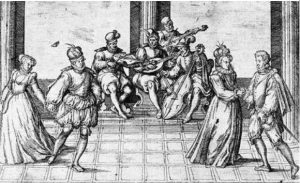 Shakespeare loved music, using it to create all kinds of mood in his plays. He also often staged dances, but I hadn’t realised until I listened to a recent radio programme quite how many references to dances, often courtly ones, there are. The programme was The Early Music Show on Radio 3 on 29 May 2022 (a repeat from 2019).

In this, choreographer and dance historian Darren Royston and Lucie Skeaping take a look at the 16th-century dancing manual, Orchesographie, published in France in 1589. It was as a result of this publication that many of the dances described became familiar across Europe. It’s a fascinating listen that includes many references to Shakespeare, including recordings of some of his songs.

Jigs were so popular they were performed at the end of each play staged, and Shakespeare mentions morris dancing and the hobby horse so casually it’s clear they were known to all. One of the sections they focus on in the programme is a discussion in Twelfth Night between Toby Belch and Andrew Aguecheek. Andrew hopes to make an impression on Olivia by his skill in dancing, egged on by Toby. He delights in masques and revels, claims he can do a kickshaw, and they go on to use a whole series of terms to describe more courtly dances:

Toby Belch: What is thy excellence in a galliard, knight?
Andrew Aguecheek: Faith, I can cut a caper.
Toby Belch:  And I can cut the mutton to’t.
Andrew Aguecheek: And I think I have the back-trick simply as strong as any man in Illyria.
Toby Belch:… Why dost thou not go to church in a galliard and come home in a coranto? My very walk should be a jig; I would not so much make water but in a sink-a-pace… Is it a world to hide virtues in? I did think, by the excellent constitution of thy leg, it was formed under the star of a galliard.

All this and more is explained in this really enjoyable programme. While our present Queen isn’t going to be doing any dancing this weekend, remember the music and dances loved by her forbear, Queen Elizabeth 1.