“The long day’s task is done, and we must sleep”

Posted on September 8, 2022 by Sylvia Morris 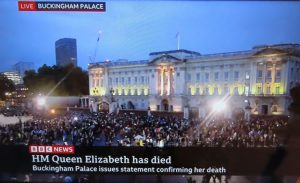 With the death of Queen Elizabeth II today, 8 September 2022, we’re now going to live through something that few British people alive can remember as a new monarch succeeds to the throne. Tributes are flooding in, crowds carrying flowers gather at Buckingham Palace, at her favourite and most historic home Windsor Castle and at Balmoral Castle where she died.  And the second Elizabethan era has come to an end.

Like her namesake and another long-lived monarch, Elizabeth 1, the Queen died peacefully. Lawyer John Manningham wrote “This morning, about three o’clock, her Majesty departed from this life, mildly like a lamb, easily like a ripe apple from the tree”. When she died in 1603 Elizabeth 1 had reigned for 45 years, which must have seemed an unimaginably long time.

Commentators on TV are saying it is a moment of change and transition that will take some time for the nation to adjust to. And so it must have been in 1603. Shakespeare lived through that change, and  must have felt it keenly, both professionally and personally. In his earlier plays he wrote repeatedly about the life and death of kings, and the turbulent times in which they lived. Some of his most memorable speeches relate to what it means to be a monarch, and although Richard II’s reign and death were very different from Elizabeth II’s, this wonderful speech has been going through my mind this evening, a reminder of the transience of power and the impermanence of life:

of comfort no man speak:
Let’s talk of graves, of worms, and epitaphs;
Make dust our paper and with rainy eyes
Write sorrow on the bosom of the earth,
Let’s choose executors and talk of wills:
And yet not so, for what can we bequeath
Save our deposed bodies to the ground?
Our lands, our lives and all are Bolingbroke’s,
And nothing can we call our own but death
And that small model of the barren earth
Which serves as paste and cover to our bones.
For God’s sake, let us sit upon the ground
And tell sad stories of the death of kings;
How some have been deposed; some slain in war,
Some haunted by the ghosts they have deposed;
Some poison’d by their wives: some sleeping kill’d;
All murder’d: for within the hollow crown
That rounds the mortal temples of a king
Keeps Death his court and there the antic sits,
Scoffing his state and grinning at his pomp,
Allowing him a breath, a little scene,
To monarchize, be fear’d and kill with looks,
Infusing him with self and vain conceit,
As if this flesh which walls about our life,
Were brass impregnable.