A rose by any other word 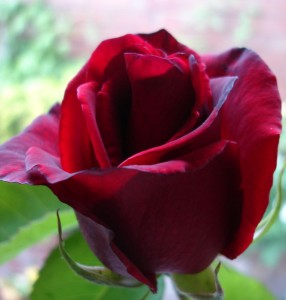 The scent of roses is in the air already this year. With whole gardens devoted to its many varieties, no flower has a closer association with summertime in England. As national flower, it also has a special link with the history of the country.

The Wars of the Roses were civil wars which raged from 1455-1485, and their continuing fame owes much to Shakespeare’s plays. Shakespeare imagined the famous scene in the Temple Garden in London, Act 2 Scene 4 of Henry VI Part 1, in which a group of arguing young noblemen pluck either red or white roses according to whether they support the house of Lancaster or York. In a theatre offering little in the way of visual resources, this scene was a brilliant stroke, together with the idea of making the supporters of each side continue to wear their roses, making it easier to follow the complicated twists and turns of the story. 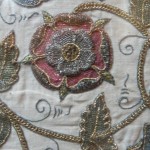 An embroidered Tudor rose on display at Petworth House, Sussex

The conflict ended with accession of Henry VII and his marriage, and the double rose combining the red rose of Lancaster and the white rose of York came to symbolise not just the house of Tudor which he founded but the unity of England as a whole.

The Tudor rose, symbolising unity, appeared as a decorative emblem in many different places. The two examples here show it as a carving on the front of Harvard House, Stratford, and a piece of embroidery associated with Queen Elizabeth’s favourite, Robert Dudley, Earl of Leicester. 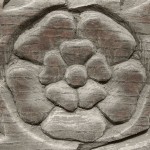 Roses have many symbolic meanings. For Shakespeare and for poets before and since, they have both positive associations with love, youth, beauty and sweetness and negative ones with blood, changeability and time. The combination of the rose’s beauty and its thorns symbolise the pleasures and pains of romantic and sexual love.

One of Shakespeare’s most famous lines contains a reference to a rose, spoken by his most romantic heroine, Juliet:

What’s in a name?
A rose by any other word would smell as sweet.

In A Midsummer Night’s Dream Theseus tries to persuade a young girl, Hermia that marriage (the rose distill’d)  is preferable to living as a nun:

But earthlier happy is the rose distill’d
Than that which withering on the virgin thorn
Grows, lives, and dies in single blessedness.

And in Twelfth Night Orsino likens youthful beauty to a rose in bloom:

For women are as roses, whose fair flower
Being once display’d, doth fall that very hour.

And so they are; alas that they are so!
To die, even when they to perfection grow!

In his plays about the Wars of the Roses, as well as using roses to signify the opposing sides, Shakespeare uses roses as powerful symbols. See this blog for a discussion about the tragedy of the Battle of Towton, fought in 1461, where the horrors of civil war are made real: a father kills his son, a son his father, and there is blood on the face of a corpse:

The red rose and the white are on his face, the fatal colours of our striving houses.

John Gerarde, in his Herball, published in 1597, comments on the importance of the flower :

The rose doth deserve the chief and prime place among all floures whatsoever; being not onely esteemed for his beauty, vertues, and his fragrant and odoriferous smell; but also because it is the honor and ornament of our English Scepter, as by the conjunction appeareth, in the uniting of those two most Royall Houses of Lancaster and Yorke.

Fortunately we’re now able to enjoy the flowers solely for their beauty. 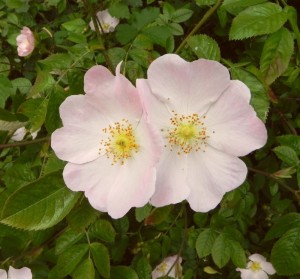 9 Responses to A rose by any other word