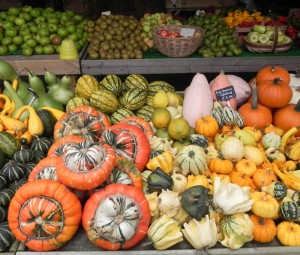 Can you imagine life without tea, coffee and perhaps most of all chocolate? We think of these as essentials, but all are derived from plants which can’t be grown in this country, and which only began to be imported after Shakespeare’s lifetime.

Shakespeare’s such a familiar figure in some respects that it comes as a surprise to think that he never tasted some of the foods we take so much for granted.

Here’s a discussion of one particularly English treat:

Looking round my own garden at what food plants I’m growing, I realise how few of them would have been available to Shakespeare. Tomatoes and potatoes – no,  onions and spinach– yes,  garlic, apples, parsnips, lettuces, yes,  runner beans, sweetcorn, courgettes,  probably not, though plants related to some of them such as broad beans and squashes were commonly grown.

Few plants would have been ready to eat in springtime, so over-wintered roots like parsnips and turnips would have been valuable additions to the diet. Delectable asparagus spears and strawberries must have been a wonderful treat when they came in. Other foods once regarded as special, like the “pippins [apples] and cheese” mentioned as the finale to a dinner in Shakespeare’s The Merry Wives of Windsor would nowadays be regarded as pretty mundane.

One of the reasons we know so much about what plants were grown in Shakespeare’s lifetime is because of the books about plants which were published. These were not just gardening manuals but include information about the virtues or medicinal qualities of the plants. Of these, John Gerarde’s Herball, first published in 1597, is probably the most famous and the most beautiful, with hundreds of woodcuts illustrating the plants. All sorts of plants are mixed up in this wonderful book: flowers, herbs, vegetables, trees, rather as  we’re now encouraged to grow vegetables in flower beds in our own gardens. Not all the plants listed by Gerarde are what they seem: his “potato” is what we now know as the sweet potato, and the rarer “potatoes of Virginia” are the direct ancestor of the vegetable that is now a staple part of our diet.

This week the Chelsea Flower Show puts plants originating from all round the world, now being grown in UK gardens, under the spotlight. The variety and quality of plants available to us from plant breeders is astonishing. At the other extreme, Richard Mabey’s book Flora Britannica lists traditional plants and encourages people to go back to the pastime of foraging for foods growing wild like blackberries and wild garlic.

It’s been suggested that as Shakespeare lived for a time near to Gerarde’s garden in London this garden might have inspired some of his references to plants. Who knows? Shakespeare certainly couldn’t rely on a cup of coffee to get his creative juices going!