The corruption of power 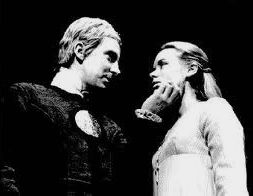 Ian Richardson as Angelo and Estelle Kohler as Isabella in the RSC’s 1970 production of Measure for Measure. Photograph by Tom Holte.

Political corruption was one of Shakespeare’s favourite subjects. You would expect to find it in tragedies like Hamlet and Richard III where power and its abuse are at the heart of the plot, but Shakespeare puts the subject of the corruption of power slap bang into a play categorised as a comedy, Measure for Measure.

Measure for Measure is one of my favourite plays, and I was planning a post about the leading female character, Isabella, when the allegation broke that International Monetary Fund head Dominique Strauss-Kahn was being accused of raping a chambermaid. All of a sudden there was one of Shakespeare’s favourite subject, politics combined with sexual misconduct, in the headlines.

Covering the story in the Guardian of 16 May, the journalist made the link:

For some, the story of Strauss-Kahn’s fall from presidential hopeful to prison cell was a combination of sordid tale and Shakespearean tragedy.

Like Strauss-Kahn, the Angelo we see at the start of the play has a pretty well unblemished reputation.  He is known to be a man “whose blood is very snow-broth”, but he quickly finds himself overwhelmed by desire for Isabella, a young woman who comes to plead for her brother’s life. Up to this point it’s possible to be quite sympathetic to Angelo. At the beginning of the play his boss, the Duke, has set him up. Instead of doing something himself to enforce the laws regarding social disorder,  the Duke puts Angelo in complete control and announces his intention to leave the city.

So although he may be severe, we’re not altogether against Angelo. For all we know, after Angelo’s first meeting with Isabella it’s just possible that the play could be about the redeeming power of love.

By the time of their second meeting, Angelo has done some thinking, and explains the deal to Isabella. Now we find out he’s not at all interested in a relationship, but a grubby transaction: sex in exchange for the lifting of her brother’s death sentence. Isabella threatens to expose Angelo, and in a chilling moment he turns on her:  “Who will believe thee, Isabel? … Say what you can; my false o’erweighs your true”. Angelo, the political animal, “seeming, seeming”, reveals itself.

Going back to Dominique Strauss-Kahn, it isn’t just the chambermaid’s word that is damaging. A further allegation has been made, of an attack on another woman several years ago, which was reported in a limited way but hushed up. It’s this cover-up which now is causing a major upset, and means that his political career is in tatters, his hope of being France’s next President gone.

4 Responses to The corruption of power