A Midsummer Night’s Dream: lost in the forest 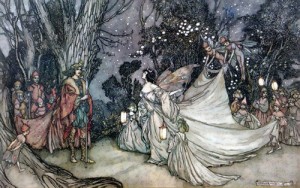 Arthur Rackham's illustration of the meeting of Oberon and Titania

It’s the longest day of the year, a time when our ancestors believed the supernatural came particularly close to the human. So where does Shakespeare set his play where, on Midsummer night, the world as we know it gets turned upside down?  In a forest, of course!

Forests are secretive and mysterious, full of unexplained sounds and shadows, and many writers have conjured up a sense of unease combined with nostalgia by using a forest setting, from the wonderfully-imagined living forests of Tolkein’s Lord of the Rings cycle to Kipling’s poem The Way Through the Woods   read here by Andrew Motion.

Woodlands were still common in Shakespeare’s England, though the Forest of Arden itself was already in decline. For Shakespeare woods have a whole series of symbolic meanings. They can be places of unlawful and horrific violence: the rape of Lavinia in Titus Andronicus and the near-rape of Silvia in The Two Gentlemen of Verona take place in forests. They can also be places of refuge: in a parallel with the legends of Robin Hood in Sherwood Forest, woodland provides a secular sanctuary for those on the run from the scheming life of the court, such as Valentine in The Two Gentlemen of Verona and the banished Duke in As You Like It.

The forest in A Midsummer Night’s Dream is different from this pastoral vision because it’s dominated by the supernatural. Here the imagination runs riot:

… in the night, imagining some fear,

How often is a bush supposed a bear

It’s a place of confusion, where people lose their minds and even their identities. Certainties are turned on their heads. Hermia, abandoned by her lover Lysander voices this paradox:

For all this, by the end of the play all the arguments have been resolved. The four lovers are paired up and married. Bottom has been turned back into a man and the mechanicals have performed their play. The frostiness between the Theseus and Hippolyta has evaporated and Oberon and Titania are strong in amity. People come out of the forest changed for the better, and as this is only a play I don’t think we should get too hung up on the fact that this has been achieved through witchcraft.

Keith Thomas, in his book Religion and the Decline of Magic, suggests that especially in rural areas, belief in fairies was still common well into the seventeenth century. Fairies were “a dwarf race of mischievous but fundamentally friendly temperament” who nevertheless might steal human babies and replace them with changeling children. One of Titania’s fairies describes Puck, also known as Robin Goodfellow, a traditional figure of English folklore:

Are not you he

That frights the maidens of the villagery,

Skim milk, and sometimes labour in the quern,

And sometime make the drink to bear no barm,

Mislead night-wanderers, laughing at their harm?

Superstitions were associated with Catholicism, and it’s hardly surprising that these lingered: in the thirty years before Shakespeare’s birth people in England had been forced to change their religion between Catholic and Protestant three times. A growing interest in scientific discoveries about the world also contributed to a loss of belief in old-fashioned traditions.

A walk though an ancient woodland is still a magical experience where we can feel the echo of the past, not just on the longest day.

This entry was posted in Plays and Poems, Shakespeare's World and tagged A Midsummer Night's Dream, Arden, forest, magic, Shakespeare. Bookmark the permalink.

4 Responses to A Midsummer Night’s Dream: lost in the forest