Much Ado About Tate, Tennant, Best and Edwards 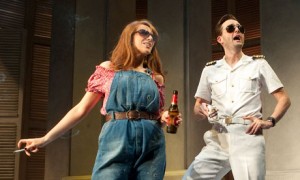 It looks like being a vintage summer for Shakespeare-lovers with lots on offer around the country. In London two productions of Much Ado About Nothing have opened within a week so it’s already possible to see two sets of the sparring lovers Benedick and Beatrice on successive nights if you can get the tickets. First to open was the Globe’s production starring Eve Best and Charles Edwards, and now the much-hyped commercial production starring David Tennant and Catherine Tate at Wyndhams Theatre in the West End has also opened.  On 16 June an outdoor production staged by the Guildford Shakespeare Company will begin.

Both productions have been highly-praised and will provide terrific ammunition for argument, particularly since the productions highlight the differences between traditional style as exemplified by the Globe’s production and the modern (The Tennant/Tate production is set in post-Falklands Gibraltar).

The play is one of Shakespeare’s most sure-fire hits, the sparring matches between Beatrice and Benedick some of his most sparkling exchanges. Back in the seventeenth century it was one of Charles I’s favourites. In his own copy of the Second Folio he wrote “Benedict and Beatrice”on the title page, presumably as a reminder of the play he’d so enjoyed on stage.

It’s been a favourite for filming: Kenneth Branagh’s film of the play set in sun-drenched Tuscany was hugely successful in bringing young audiences to Shakespeare, and there have been many others. Franco Zefirelli’s famous 1965 National Theatre stage version starring Maggie Smith and Robert Stephens was filmed for TV and screened in 1967. The cast also included Derek Jacobi and, in a tiny part, Michael Gambon.

Until recently this version, like so much early TV, was though to be lost, but was uncovered in the Library of Congress in Washington, DC.

A new research project has just started aimed at documenting plays written for the stage which have been screened on television since 1930. It will be fascinating to see how this develops over the three years it will run: it should make these rare recordings more widely available.

Stage productions are frequently filmed and let’s hope the opportunity to capture the Tennant/Tate production isn’t missed. The Globe regularly videos its own productions, as does the National Theatre, so their 2007-8 production starring Simon Russell Beale and Zoe Wanamaker is available at their archives.  In Stratford-upon-Avon videos have been made of productions since 1982 making it possible to see every production since the Derek Jacobi and Sinead Cusack one from that year at the Shakespeare Centre Library and Archive. Many productions have also been recorded on sound tape and may be listened to at the British Library Sound Archive, including as the classic 1976-7 production starring Judi Dench and Donald Sinden.

Finally, Dr Who fans sorry to hear that the Daleks are being given a bit of a rest from the TV series may enjoy this version of a scene from Much Ado About Nothing from the Dalek Masterpiece Theatre, courtesy of YouTube (love the cloak).

6 Responses to Much Ado About Tate, Tennant, Best and Edwards