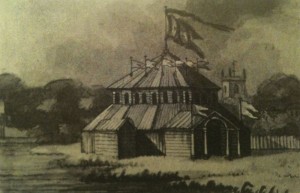 The Jubilee pavilion on the banks of the River Avon, 1769

The story of Stratford’s rise from being a typical market town into an international tourist destination is often said to start in 1769 when the greatest actor of the day, David Garrick, put on a three-day celebration of Shakespeare. The fact that this happened in Stratford, not London, raised more than a few eyebrows. Garrick had originally been invited to dedicate a statue of Shakespeare for the niche on the new Town Hall. A true showman, he decided to use the opportunity to mount an entertainment on a grand scale in which he would take the starring role.

The new Town Hall was elegant, but not large enough for the kind of show Garrick had in mind. The temporary wooden amphitheatre that he built was designed to seat 1000 with a stage large enough for 100 performers. It was built, as you can see from the picture, near to the River Avon, much too near as it turned out.

Garrick’s Ode was the centrepiece of the whole festival, with musical accompaniment written by the composer Thomas Arne and performed by the entire orchestra and chorus from Drury Lane Theatre London. In Stratford it was received enthusiastically by an audience reported to be 2000 strong despite the torrential rain. The Jubilee itself was not the success Garrick had hoped for, but all was not lost because he took advantage of the interest it raised among the fashionable in London. 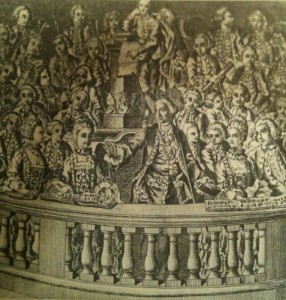 He wrote a play, The Jubilee, dramatising the events of the three days. He was able to include the procession of characters from Shakespeare’s plays which had been rained off in Stratford as well as the declaration of the Ode itself. According to Vanessa Cunningham’s book Shakespeare and Garrick the script indicates entrances for 320 individuals, three horses and one dog. This spectacular entertainment was performed 153 times between 1769 and 1776, a record for any London production.

It isn’t quite true that there was no tourist industry in Stratford before the Garrick Jubilee. There is evidence of people visiting places known to Shakespeare right back into the seventeenth century. The Jubilee strengthened the association of the town with Shakespeare and planted the seed of the idea of a prolonged festival in Stratford, eventually culminating in the building of a permanent theatre as a memorial to Shakespeare to which audiences would come from all round the world.