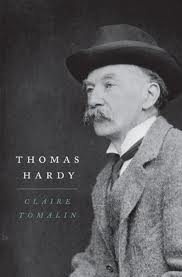 Thomas Hardy: the jacket of the biography by Claire Tomalin

A few days ago, on June 2nd  it was the birthday of the novelist Thomas Hardy, a giant of literature whose long career spanned the nineteenth and twentieth centuries. In a discussion on this morning’s Radio 4 Broadcasting House (about 37 minutes into the broadcast) Michael Irwin and Claire Tomalin discussed Hardy’s writing and his continuing popularity. Once Hardy had become a successful novelist he turned back to his first love, poetry, and spent his last thirty years writing over 1000 poems.

They discussed how Hardy’s love of poetry informed the prose writing in his novels, people and places being “poetically described”. In his most famous book, Tess of the D’Urbervilles, Tess, always an emblematic figure, is seen in a series of striking landscapes, from dancing in the lush English countryside, standing to work incessantly on a symbol of the machine age, a steam-driven thresher, to sleeping in the middle of the ancient site of Stonehenge on the night before her arrest.

Much of the emphasis on “one character alone in the landscape” has echoes in Shakespeare’s play King Lear, and there are many reminders of Shakespeare in Hardy. Michael Henchard, the Mayor of The Mayor of Casterbridge, is described by Hardy as having “introspective inflexibility”, a phrase which reminds me of the description of Lear by one of his daughters that he “hath ever but slenderly known himself”. Both characters suffer personal disasters as a result of their own actions.

Hardy knew Shakespeare’s works well, quoting and referring to his work in many places, and not just the tragedies. The title of Hardy’s Under the Greenwood Tree is a direct quote from As You Like It. Hardy’s 1916 poem To Shakespeare After Three Hundred Years, written to celebrate the anniversary of his death, described Shakespeare as “Bright baffling soul, least capturable of themes”, and imagines Shakespeare’s retirement to a town peopled by those who knew little of his work.

Years before, in August 1896 he and his wife spent several days in Shakespeare’s town, after the publication of the last of his novels, Jude the Obscure. While in Stratford-upon-Avon he purchased a copy of Hamlet. Perhaps he wanted to re-read the play while in Shakespeare country itself; the book contains annotations in his own hand. After Hardy’s death this text was given to his old friend the Shakespeare director, playwright and critic Harley Granville-Barker, and many years later this precious little book was purchased by the Shakespeare Birthplace Trust where it may still be studied in the Shakespeare Centre Library and Archive.

2 Responses to Thomas Hardy and Shakespeare