Shakespeare, portraits, and finding the mind’s construction in the face

The Tailor, by Moroni

Last week I spent some time admiring a group of portraits now in the National Gallery, London, by the North Italian painter Moroni who lived from around 1520 to 1579. One is very well known. In The tailor the subject is an artisan, holding his scissors to cut a piece of black cloth, the expensive material that most of Moroni’s wealthy subjects wear. As explained in this video, by the mid-sixteenth century having your portrait painted was no longer the preserve of the rich or famous.

Moroni would have been paid to paint these portraits of important people, soldiers, gentlemen, churchmen. While they are very much real people, their expressions are often distant, superior. I was particularly intrigued by the Portrait of a Man holding a letter. Follow the link to Moroni above to see this painting and others. Why would you want a portrait to make you look so severe and haughty? Later I realised that the sitter was probably a lawyer and you can imagine this man was superbly good at arguing his case in the court room. He certainly doesn’t want to be liked.

Later that day I heard that Lucien Freud, another great portrait painter, had died. Unlike Moroni and most portrait painters from the past, Freud chose who he wanted to paint and didn’t work to commission. He didn’t have to flatter his subjects and rather than allow them to shield themselves with clothes, he often painted them naked. As he put it:

I’m really interested in people as animals. Part of my liking to work from them naked is for that reason. Because I can see more; and it’s also very exciting to see the forms repeating right through the body and often the head as well. I like people to look as natural and as physically as ease as animals.

This sounds relaxed, but Freud’s portraits often show people as vulnerable and troubled, and can be difficult to look at.

Florence Waters, in the Daily Telegraph  on 22 July points out:

Freud had an almost visceral hatred of almost all art of the Renaissance. It makes sense: the Renaissance was the period, above all, during which man was celebrated as the crown of creation. Freud’s belief was the opposite: man, he seems to say, must never forget the fact that he is deteriorating matter.

But Moroni’s portraits, beautiful as they are, don’t simply celebrate the human form. His subjects are clever, brave or shrewd but sometimes also aging or ill. Like Freud, Shakespeare too reminds us of our mortality. As artists, all are interested in psychological truth though they approach it by different routes. 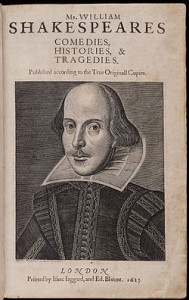 The Droeshout engraving of Shakespeare, 1623

There’s often a sense that portraits of Shakespeare can, or should, capture the essence of the writer. Even in 1623, though, the people who contributed poems to the First Folio pointed out that Shakespeare was best portrayed in his works rather than the authenticated engraved portrait in the book. Hugh Holland, Leonard Digges and James Mabbe all make the same point. As Digges put it:

This book,
When brass and marble fade, shall make thee look
Fresh to all ages.

Other supposed portraits of Shakespeare like the Chandos or the recently-attributed Cobbe show a more handsome man but are no more successful in showing Shakespeare’s mind.

There’s no art
To find the mind’s construction in the face.

and Ben Jonson wrote that if the engraver of the First Folio portrait could have done so “the print would then surpass/ All that was ever writ in brass”.

What, I wonder, would a portrait of Shakespeare by Moroni or Freud have been like?

2 Responses to Shakespeare, portraits, and finding the mind’s construction in the face