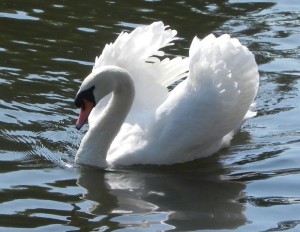 Ben Jonson’s memorial poem to Shakespeare published seven years after his death in the First Folio contains lines which famously link Shakespeare to the River Avon and to the magnificent birds that live on it.

Sweet Swan of Avon! What a sight it were
To see thee in our waters yet appear,
And make those flights upon the bankes of Thames
That so did take Eliza and our James!

Swans are associated with beauty, fidelity and strength. They have their own myths: Shakespeare refers several times to the idea that although mute, they sing before they die. In Othello, Emilia says “I will play the swan,/ and die in music”.  They are, inevitably, linked with beauty. Trying to persuade Romeo to forget Rosaline Benvolio tries to find him another love “I will make thee think thy swan a crow”.

Swans have been on the Avon for centuries. The medieval Guild of the Holy Cross which then ran the town held annual feasts in which swans were served as delicacies. An eighteenth century painting shows a swan on the river near the church.

The river had a healthy population of swans until the 1970s when, along with much of the rest of the country, numbers declined and the Swan Management Committee was set up to promote the health and welfare of Stratford’s swans. A swan reserve was opened in 1981, lead angling weights were banned, and by the mid 1980s swans were again breeding. The committee still cares for the birds, operating a feeding programme, ringing and monitoring the flock and carrying out rescues. Money is raised to pay for this work and for medical treatments. As a result there are now around 50 adult swans to be seen on the river every day, and on average three pairs breed every year. 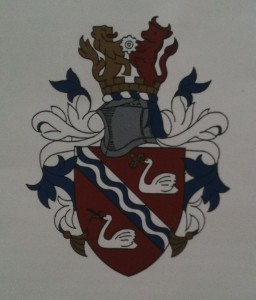 The birds are so closely associated with the town that in the 1980s Stratford-on-Avon District Council incorporated swans into their coat of arms.

Swans are to be found everywhere. The RSC’s Swan Theatre, right by the river, opened in 1986, and for many years a swan was the symbol of the RSC. The striking metal sculpture of a pair of swans in the Bancroft Gardens was opened by the Queen in 1996. The town’s classical orchestra is named the Orchestra of the Swan.

After Shakespeare’s time, the building in which he was born became a public house called The Swan and Maidenhead, and there are many other pubs and hostelries associated with swans: the nearest hotel to the Birthplace is the White Swan, and near the river is the Black Swan, universally known as the Dirty Duck, its pub sign decorated differently on each side. Near the Clopton Bridge is the Swan’s Nest Hotel. Another hotel, the Alveston Manor, has a Victorian stained glass panel which includes an image of a swan.

The popular American poet of the late nineteenth and early twentieth century Ella Wheeler Wilcox wrote a poem On Avon’s Breast I saw a Stately Swan. It’s a nostalgic poem written during a period of strife, discord and unrest, longing for the innocence and simplicity of the past. Although he isn’t mentioned directly Shakespeare is identified with the swan throughout the poem:
All heaven was one blue background for the grace
Of Avon’s beautiful, slow-moving swan.

This is the last in the series on Shakespeare’s Avon. Here are some of our photographs of Stratford’s swans taken within the past year 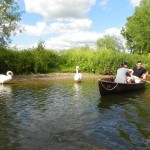 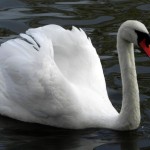 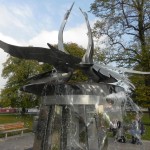 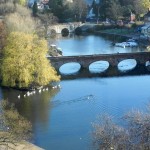 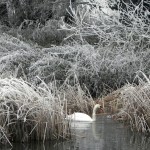 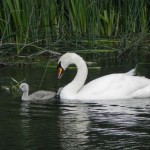 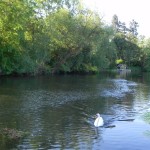 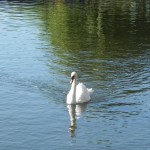 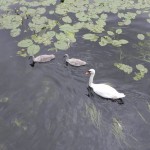 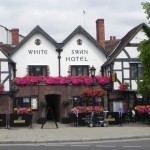 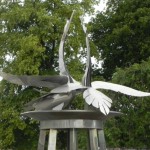 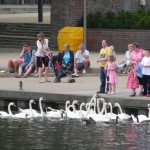 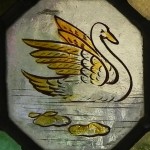 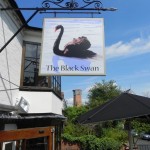 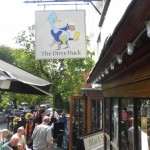 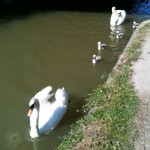 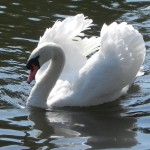 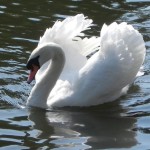 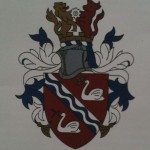