Shakespeare and Doctor Who

Doctor Who is a quintessentially English, science fiction TV programme which was first screened in 1963. To date eleven actors have played the part of the eccentric time-traveller.  A few weeks ago there was a jokey suggestion in the press that the current Doctor Who, Matt Smith, and his companion Amy, Karen Gillan, might play the Macbeths in Shakespeare’s play. Neither have a track record of performing Shakespeare.

Doctor Who has a long history of Shakespeare associations, and I’ve been taking a look at some of them. The first Doctor, William Hartnell, was an actor whose greatest ambition was to be a comic like his hero Charlie Chaplin. He came to the role late in life, following success in British films. He is said to have got his first professional job with Frank Benson’s Shakespeare Company aged only 16. Sadly I’ve not been able to verify this as his name doesn’t appear in any of the programmes for the Shakespeare Festivals inStratford-upon-Avon (not unusual since so many actors use stage names). I’ve not found any evidence that he ever played in comedy.

I’ve drawn a blank with Jon Pertwee, but the fourth Doctor, Tom Baker, played in a number of Shakespeare productions for the National Theatre and Bristol Old Vic among others from 1966, including playing Macbeth. Tom Baker’s probably the actor whose career has been most strongly influenced by the role but after leaving the series in 1981 he managed to shake it off, and returned to the theatre playing Frank in the RSC’s production of Educating Rita.

Peter Davison and Colin Baker don’t seem to have any Shakespeare credentials, but many years later Peter Davison’s daughter Georgia Moffett appeared in one of the episodes with David Tennant. Romance blossomed because they are now engaged and have a baby daughter.

The next Doctor, Sylvester McCoy, played the Fool to Ian McKellen’s King Lear for the RSC in 2007, and other Shakespeare roles have included Puck in A Midsummer Night’s Dream and Feste in Twelfth Night.

Paul McGann was the last Doctor before the programme was put on ice during the 1990s. He’s played at Shakespeare’s Globe, but not in Shakespeare, and has appeared in a number of Shakespeare recitals. 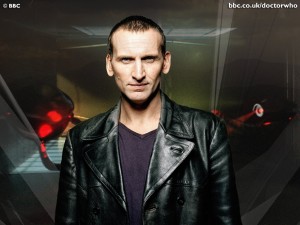 When the programme was revived in 2005 Christopher Eccleston took the role, a serious actor with a strong track record in TV drama. In 2002 he had played Hamlet at the West Yorkshire Playhouse, and he notably played Ben Jago, the Iago character in a modern version of Othello for TV.

Eccleston did only one series of Doctor Who, but achieved a remarkable level of success, establishing the series which had become known for its cheap sets and camp humour as a serious piece of TV drama.

David Tennant, another established actor, took over the role and played it for several years. He’d been a member of the RSC and the National Theatre whose Shakespeare credentials included Romeo, Antipholus of Syracusse and Touchstone. While playing Doctor Who he took time out to perform the leading role in Hamlet and Berowne in Love’s Labour’s Lost in Stratford and London, and filmed Hamlet for TV.

As well as Doctor Who’s playing Shakespeare, Shakespeare himself has featured in a number of episodes of the programme. I’ve only recently come across this one from 1965 in which the first Doctor and his assistants get a peep at the court of Queen Elizabeth through the time-space visualiser. You’ll find the link to the video on this page.

Both the 4th and the 6th Doctors apparently claimed to have met Shakespeare. But the best is the episode called The Shakespeare Code, featuring David Tennant as the Doctor, and Dean Lennox Kelly as Shakespeare. Screened in 2007 it was the most expensive episode ever made at the time because of the amount of location work ti required in Warwick, Coventry and Shakespeare’s Globe. The programme featured three witches straight out of Macbeth and speculated about how Shakespeare’s play Love’s Labour’s Won came to be lost. Shakespeare takes a fancy to the Doctor’s assistant Martha who he calls his Dark Lady, and on several occasions the Doctor supplies Shakespeare with some of his own lines. The whole thing’s on YouTube, broken up into scenes if you’d like to see it.

At the crisis point Doctor Who calls on Shakespeare to foil the witches plot by shouting some of his own poetry. The power of words reverses the spell and saves the world. It’s a scene that the writer must have very much enjoyed writing.

This entry was posted in Legacy and tagged Doctor Who, Love's Labour's Won, Macbeth, science fiction, Shakespeare. Bookmark the permalink.

7 Responses to Shakespeare and Doctor Who