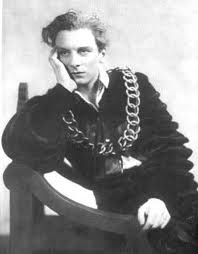 A young John Gielgud in his first Hamlet

If asked to name the greatest Hamlet of the mid-twentieth century most people would suggest Laurence Olivier. It was, though John Gielgud who received more critical acclaim and who, for people alive at the time, was most closely associated with the part.

John Gielgud was born on 14 April 1904. Coming from a famous theatrical family, his acting career started early and he had already become a leading man inLondon’s West End by the mid-1920s. His first major success in Shakespeare came during the 1929-30 season at the Old Vic, when at 25 he become the youngest to play Hamlet in living memory. The famous critic James Agate judged his performance to the “the high water mark of English Shakespearian acting in our time” and the production transferred to the Queen’s Theatre in London.

In 1934, John Gielgud took a gamble, directing and performing Hamlet at what was then the New Theatre (renamed the Albery in 1973). Shakespeare was rarely seen in the West End at the time. W A Darlington, the Daily Telegraph critic, said “In every syllable that he speaks, there is evidence of an understanding mind at work so that the lines come fresh to the minds of the audience as if the part had never been acted before”. For those used to seeing Gielgud as an elderly man, it may be a surprise to read W Jesse Collings statement that “He rather gave me the impression of a moody modern youth who needed spanking”.  This production, running for 155 performances, defined Gielgud as the Hamlet of his generation.

One of the reasons for his success was that he was able to bridge the gap between the world of the theatre and academia, regularly taking advice from Harley Granville Barker and scholar George Rylands and predicting the post-war rise of academic interest in Shakespeare onstage. 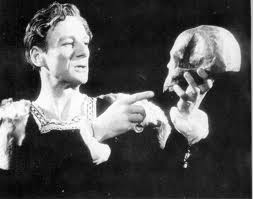 Hamlet in a 1940s production

Two years later Gielgud was directed by Guthrie McClintic at another revival at the Empire Theatre, New York. McClintic aimed to produce a less noble Hamlet in a swift fast-moving production. Rosamund Gilder was editor of Theater Arts magazine and wrote a book documenting the production. She concluded “He combines the power to convey subtle movements of the spirit, delicate shades of thought, the inner workings of mind and hear, with an ability…to tear off a “passionate speech” with the best of them…In his hands Hamlet seems born again every night.” The production played for a record 132 nights in New York, easily breaking the great John Barrymore’s record. Gielgud greatly admired Barrymore and receiving a telegram from him congratulating Gielgud on his “brilliant success” was one of the most wonderful events of his life.

In 1939 he appeared in another production at the castle in Elsinore, then in 1944, searching for a new approach, he invited the academic George Rylands to direct him at the Theatre Royal, Haymarket. Many felt this to be his most successful production. His last performances were in an ENSA tour to the Middle and Far East in 1945-6.

Later in life he recollected “I was amazingly lucky with Hamlet. By the time I had finished with it I did not want to read or write about it any more. I had played it many hundreds of times over fifteen years, in six different productions.”

The reason why Olivier’s performance has overtaken Gielgud’s is of course the 1948 film which cut the play to half its normal length. Olivier had previously played the role in 1937 and by the time of the film was a distinguished stage and film actor. The film won four Oscars including Best Actor and Best Film.

Few recordings remain to give the flavour of Gielgud’s performance. Elliot Norton, in the Boston Post, wrote “His greatest asset is his voice… It is like a musical instrument on which he plays at will, lightly and expertly”. Another critic wrote “Never has English sounded more beautiful from the human mouth”, and Donald Sinden, then a young serviceman who attended one of Gielgud’s last performances wrote “He turns to Horatio and Marcellus and says “Nay, come, let’s go together”. I wish I could describe how many facets Gielgud gave to that simple line”.
http://www.youtube.com/watch?v=BCyjXJ9oogg
This rare recording of three speeches from the play was made several years after Gielgud stopped playing the part. His performance was always intellectual, often romantic, and it’s a pity the trembliness in his voice, which became more pronounced as he got older, is so obvious.

James Agate followed Gielgud’s career from its beginnings and in 1944 wrote “I hold that this is, and is likely to remain, the best Hamlet of our time”.

This entry was posted in Plays and Poems, Shakespeare on Stage and tagged Hamlet, John Gielgud, London, New York, Shakespeare. Bookmark the permalink.

One Response to Shakespearian stars 3: John Gielgud as Hamlet