More about Shakespeare and the King James bible 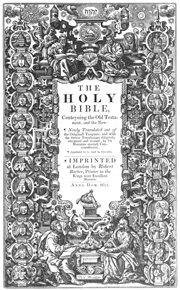 You can’t have missed the fact that 2011 marks the 400th anniversary of the publication of the King James Bible. Many of the events and articles celebrating this milestone have made the connection with Shakespeare as the KJ Bible was published only 12 years before the posthumous collection of Shakespeare’s plays in the First Folio. These two great books have influenced the English language, contributing words, phrases and ideas from that day to this more than any others.

The King James Bible was published too late in his life to have any real influence on Shakespeare’s writing. It was by no means the first bible available in the vernacular, there being eleven translations before the King James version, beginning with Tyndale’s unofficial version in 1526, the one which Shakespeare knew best being the so-called Geneva Bible. 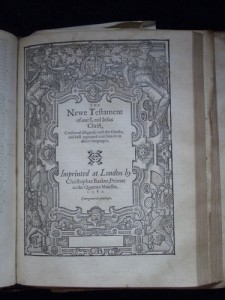 The New Testament in the 1581 edition of the Geneva Bible

The King James Bible, too, was not a completely new translation, but drew heavily on earlier versions. The importance of having a bible which could be understood by the people is explained in the book’s Note to the Reader:

But how shall men meditate in that, which they cannot understand? How shall they understand that which is kept close in an unknowen tongue? …. Translation it is that openeth the window, to let in the light; that breaketh the shell, that we may eat the kernel; that putteth aside the curtaine, that we may looke into the most Holy place; that remooveth the cover of the well, that wee may come by the water, even as Jacob rolled away the stone from the mouth of the well, by which meanes the flockes of Laban were watered. Indeede without translation into the vulgar tongue, the unlearned are but like children at Jacobs well (which was deepe) without a bucket or some thing to draw with.

You might be interested to dip into the text of the 1611 Bible – it’s available to read online. 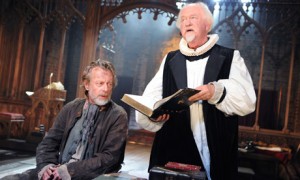 Stephen Boxer as Tyndale and Oliver Ford Davies as Lancelot Andrewes, the convenor of the translation committee, in the RSC's production of Written on the Heart

The Royal Shakespeare Company is currently performing David Edgar’s new play on the creation of the book, Written on the Heart, which includes humourous debates about the selection of words to appear in the new version. David Edgar has been interviewed by the Birmingham Post on the subject.

Shakespeare’s debt to the bible is apparent in plays like Portia’s speech on mercy in The Merchant of Venice, King Lear’s suffering which is paralleled in the story of Job, and Measure for Measure, where the title itself is a biblical quotation. Echoes are to be found scattered throughout his plays and several books have been published documenting these references. There’s a small exhibition on Shakespeare’s use of the bible, including an original first edition of the KJ Bible, at Holy Trinity Church, Stratford-upon-Avon, and The Folger Shakespeare Library in Washington, DC has created a fascinating website to explore to coincide with its own exhibition Manifold Greatness.