Mourning at the closing of the year 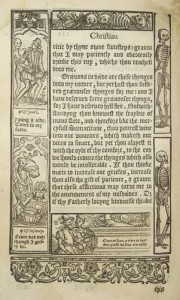 Richard Day's Book of Christian Prayers, 1581. Death is always at the shoulder of people of all ages

Shakespeare often idealised brotherhood: not just as a literal bond of blood, but also as a relationship of close trust and love.

In his own life Shakespeare was one of eight siblings. Infant mortality took its toll, two sisters dying as babies, and his little sister Anne dying aged only eight, but all three of his younger brothers made it to adulthood, though they died before him. By the time of his own death in 1616 only his sister Joan was still alive.

It’s likely that Shakespeare was away in London when most of his siblings died in Stratford, but we can be pretty sure that he was present when his brother Edmund was buried at St Mary Overy, in Southwark, near to the Globe Theatre, on 31 December 1607.

Edmund was Shakespeare’s youngest brother, born 16 years his junior in 1580. Without straying too far into the realms of fantasy, during his childhood he must have heard about his brother’s success as a player and writer in London, and it’s no surprise that he found his way to London to become an actor himself. We know nothing about Edmund apart from his baptism in Stratford, his burial, and a reference to the burial of his “base-born” (illegitimate) child at St Giles without Cripplegate only four months before his own death. 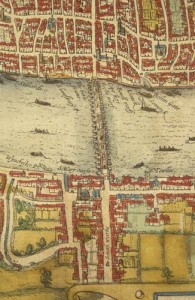 Map showing London Bridge and at the southern end, the Church of St Mary Overy

His own burial record reads “Edmond Shakespeare a player”. It was a costly funeral. The service took place in the morning “with a forenoon knell of the great bell” and Edmond was interred within the church itself. The expense, twenty shillings, is assumed to have been paid by Shakespeare himself. There is no proof that this Edmond is the one who was William’s brother, but what facts there are all fit.

Edmond’s story shows how easy it was for people to disappear from the record. When did he leave Stratford? Where did he live? Which company did he work for? What parts did he play? He was 27 when he died, around the age at which William was just about to make his mark in the theatre.

Shakespeare’s plays include examples of brotherly and sisterly love, as in Cymbeline and Twelfth Night, but sibling rivalry is more common. Think of the three daughters of Lear and the two sons of Gloucester in King Lear, Katherina and Bianca in The Taming of the Shrew and, most poisonously, in Henry VI Part 3, Richard Duke of Gloucester who sees his elder brothers Clarence and Edward only as obstacles in his way to achieve the crown.
I have no brother, I am like no brother;
And this word “love”, which graybeards call divine,
Be resident in men like one another
And not in me: I am myself alone.

Brotherhood often has nothing to do with any blood relationship. There was no better image for Henry V to use to rouse the English soldiers before the great battle of Agincourt:
We few, we happy few, we band of brothers.
For he today that sheds his blood with me
Shall be my brother. 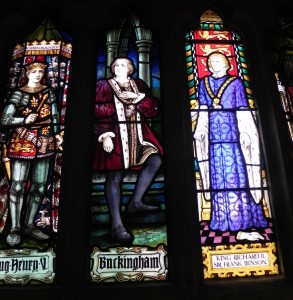 Part of the Benson windows, showing Frank Benson on the right

Also on 31 December 1939 died Sir Frank Benson, who led the Shakespeare festivals in Stratford-upon-Avon for thirty years from the mid 1880s up to the First World War. Affectionately known as “Pa” by members of his company, if anybody created the idea of a band of brothers united by the performing of Shakespeare’s plays it was him. For many years afterwards Old Bensonians held parties and performances in memory of the company. The stained glass windows depicting Benson as Richard II surrounded by members of his company can still be seen in the Royal Shakespeare Theatre, a fitting memorial to the company ideal which he promoted for so long.