Making the majestic clear? Updating Shakespeare for the 21st century 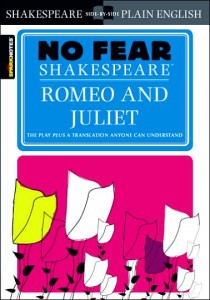 So what is more important: clarity of meaning, or poetry? Mike LoMonico recently wrote a post for the Folger Shakespeare Library’s Education blog challenging the often-voiced opinion that Shakespeare’s plays are now so difficult to understand that they should be translated. The Folger’s answer to suggestions that people should use modern versions is  “IF YOU’RE NOT GOING TO USE SHAKESPEARE’S WORDS, DON’T DO SHAKESPEARE.”

Nobody would suggest that Shakespeare’s work is easy: no matter how hard you try, there will be some bits that defeat you: editors of scholarly editions spend years on a single play but still never reach a consensus over everything. David and Ben Crystal are experts who run a website, Shakespeare’s Words, which includes a glossary, full text and notes. Part of the site, the Portal, also includes some recordings of Shakespeare in OP (Original Pronunciation), which are great fun. 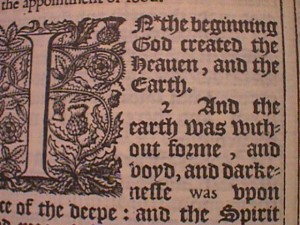 The first lines of the King James bible

David Edgar is one of our greatest living playwrights who has both written new plays and adapted existing works for the RSC. No wonder he is so intrigued by the story of the King James bible. His play Written on the Heart is less the story of how the translation was made than an examination of the dilemmas of the people involved. People died for the cause of creating a bible in English for ordinary people to read instead of being told what the scriptures meant by priests. And for much of the play the translators wrestle with the choice of individual words. The devil was literally in the detail.

The first translator of the bible into English, William Tyndale, used everyday speech, “the language of the ploughboy”, and in the play he challenges (from beyond the grave) the decision of the King James Bible translators to make the word of God both grand and poetic. He accuses the translators of sacrificing “the clear to the majestic”, and “sacrificing the meaning to the music”. Launcelot Andrewes’ response is that the translation is intended “to make the majestic clear”. 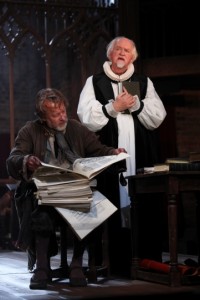 But it’s also important to be fair to modernised versions. They are created to help students get over the difficult hurdle which Shakespeare’s language can present, and they have their place. They are meant to enhance the experience of reading Shakespeare’s original, not to replace it.

The King James bible owes much to Tyndale’s translation. But it, like Shakespeare’s work, has stood the test of time not least because of the beauty of its poetic language and phrasing.

6 Responses to Making the majestic clear? Updating Shakespeare for the 21st century