Ralph Fiennes as Coriolanus: noble warrior or boy of tears? 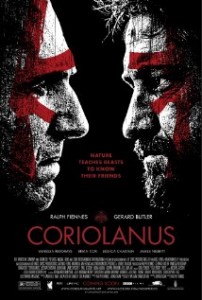 The new film version of Coriolanus, directed by and starring Ralph Fiennes has been  awaited impatiently for months. We’ve been tantalised by stills, by trailers and interviews with the stars, and now it’s finally on release.

It’s Fiennes’ first attempt at directing what is surprisingly the first feature film made of Shakespeare’s most political play. It’s a film which Fiennes, always a thoughtful actor, has clearly been planning for years, his approach to it influenced by his many film roles over the past two decades. 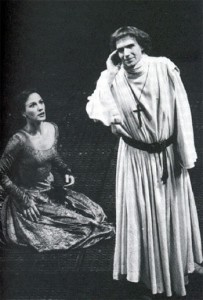 Ralph Fiennes as Henry VI and Penny Downie as Queen Margaret in The Plantagenets, RSC 1988

Fiennes’ professional involvement with Shakespeare began early: he played Romeo at the Regents’ Park Open Air Theatre before being snapped up by the RSC to play three varied parts: Henry VI in Adrian Noble’s conflation The Plantagenets, Lewis the Dauphin in Deborah Warner’s small-scale production of King John, and Claudio in Much Ado About Nothing, all in 1988. What struck me immediately was the ease with which he spoke Shakespeare’s words, the power of his voice, and a slightly unapproachable quality which served him well in all three productions. For my money he was best in King John, where he was able to display the arrogance which he uses again in Coriolanus. A diplomatic marriage is arranged between himself and the Lady Blanche. On their first meeting he says:
In her eye I find
A wonder, or a wondrous miracle,
The shadow of myself formed in her eye; …
I do protest I never loved myself
Till now infixed I beheld myself
Drawn in the flattering table of her eye.

After a season in London with the company he returned again to Stratford where he played another three roles which stretched him further: Troilus in Troilus and Cressida, Berowne in Love’s Labour’s Lost, and Edmund in King Lear. Here he had to be by turns an ardent and disappointed lover, an ironic commentator and joker, and an out and out villain. While not a natural comedian he revelled in the verbal complexity of Love’s Labour’s Lost and used his natural charm to be successful in the role. Troilus isn’t the most satisfying role, but in Sam Mendes’ Troilus and Cressida he played the young lover convincingly. Edmund in King Lear is confident, ruthless, and cold, attributes also to be found in Coriolanus.

These years with the RSC turned Fiennes into a star, and it was not long before he played the role of Hamlet at the Almeida, and moved into film work with Schindler’s List and others. In recent years he’s become best known for playing the noseless Voldemort in the Harry Potter films, but he has continued to work in Shakespeare on stage. 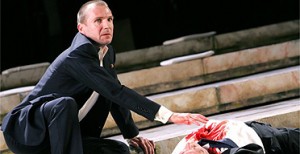 As Mark Antony in Julius Caesar at the Barbican Theatre, 2005

I last saw him in Deborah Warner’s production of Julius Caesar at the Barbican in 2005, among a star-studded cast including John Shrapnel as Caesar, Simon Russell Beale as Cassius, Anton Lesser as Brutus and Fiennes as Mark Antony. For me Fiennes failed to capture the pleasure-loving side of Antony, but as Michael Billington said, “what he does brings out strongly is the man’s cold-heartedness as he sanctions senatorial deaths with a few flicks on his laptop.”.

His most recent Shakespeare on stage was Trevor Nunn’s production of The Tempest in London in 2011, by which time he had already filmed Coriolanus. In his review Michael Coveney likened him to John Gielgud, the greatest Prospero of his day. Fiennes was “virile and determined”, and, like Gielgud “speaks the verse so naturally and beautifully”.

His performance as Coriolanus has been described as “mesmerising”, and “a bruising, brutal presence”. In the end, though, he’s a man who buckles under emotional pressure. Aufidius accuses him of “Breaking his oath and resolution like a twist of rotten silk” and being a “boy of tears”.

Looking at the Shakespearean roles Fiennes has taken during his career it’s easy to see how this one was a part he was waiting to take, while the film also hits the mark as a twenty-first century action movie.