The Chinese New Year: looking forward to the year of the dragon 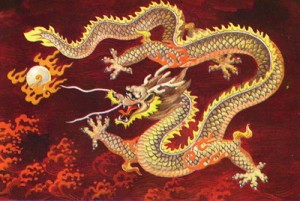 Celebrations for the Chinese New Year, beginning on 23 January, are in full swing, and over one sixth of the world’s population will be marking the event. There’s even more excitement than usual as this is to be the most favourable year of the twelve, the Year of the Dragon.

In China, dragons are believed to be helpful, friendly creatures. They bring fortune, luck and power, and are associated with the colour gold, spring, and life-giving rain.

By contrast, dragons in Western folklore have always been viewed as fire-breathing monsters. Ferocious dragons are to be found in Greek mythology and Icelandic sagas alike. Topsell’s The History of Four-footed Beasts and The History of Serpents were both published in the early 1600s and are still an important guide to the  Jacobean mindset. Their popularity was such that a combined edition was published in 1658. These books are wonderful guides to both real and legendary animals, and include a whole section on different kinds of dragons. Dragons are reportedly seen before disasters, particularly fires and pestilence. But for Topsell they are not malevolent creatures, being motivated by hunger: 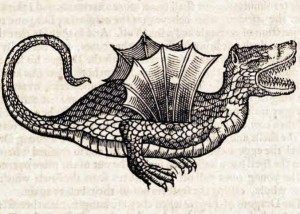 if Dragons finde not food enough to satisfie their hunger, then they hide themselves until the people be returned from the market, or the heard-men bring home their flocks, and upon a sudden they devour either Men or Besasts, which come first to their mouths: then they go again and hide themselves in their dens and hollow Caves of the earth.

Dragons have particular significance in England where it is the monster killed by country’s patron saint, Saint George. St George was originally a saint from the Middle East, a soldier saint adopted by the crusaders from Western Europe in the eleventh century. St George’s dragon, unlike Topsell’s, is a symbol of any evil or fearsome aggression, and has suited England’s military ambitions well over the centuries. 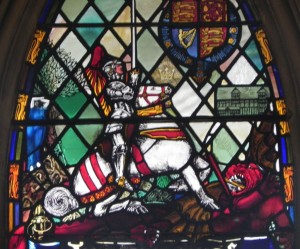 Stratford has a dragon of its own, part of the stained glass memorial window on the landing in the original Shakespeare Memorial Theatre, the only part of the building that escaped the 1926 fire. The inscription beneath the figures tells us it was erected in memory of members of the Benson acting company who lost their lives in the 1914-18 war. The window shows the mounted figure of St George, spearing the dragon. The maiden being defended is the small figure in blue on the left and, on the right, making the connection with Shakespeare, is a representation of Shakespeare’s Birthplace. If anyone’s interested in seeing this window in more detail, I’m posting several images of it on my Flickr page.

Where Shakespeare refers to dragons, it’s the creature’s aggressiveness that he fixes on: “Come not between the dragon and his wrath” says King Lear when Kent tries to intervene to stop Lear banishing his daughter. And Coriolanus likens himself to a “lonely dragon”.

This year, China will be bringing its dragons to the UK as part of the Cultural Olympiad. The Globe to Globe Festival in London is staging 37 Shakespeare plays in 37 languages, and there are to be two Chinese productions, Richard III in Mandarin by the National Theatre of China, 28-29 April and Titus Andronicus in Cantonese by the Hong Kong Arts Festival 3-4 May. Since the ending of the Cultural Revolution China has shown much interest in Shakespeare, the first Chinese Shakespeare Festival being held in 1986. And in the year of the Dragon, that symbol of the emperor and the supreme holy animal, their visit is to be greatly welcomed. This will be the first visit to the UK of the Chinese National Theatre, an opportunity for them to represent the new face of Chinese theatre.

Let’s hope that the good fortune and power of the Dragon will bring joy onto the stage of the Globe Theatre for their Shakespeare Festival.

4 Responses to The Chinese New Year: looking forward to the year of the dragon